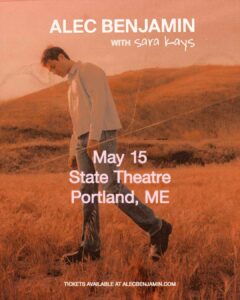 Alec Benjamin simply refers to himself as a “narrator.”

Inspired by Eminem, Paul Simon, and Citizen Cope, the Phoenix-born, Los Angeles-based songwriter fashioned a cinematic, lo-fi sound that stirred up a buzz online right out of the gate, landing him a major label deal by the age of 18. A day after he turned in his first album, he was dropped by the label he thought would take his artist project to the moon. However, it was going to take a lot more to stop him. Alec immediately hit the road for a self-booked European tour in May 2016. He performed “parking lot shows” for fans outside of Shawn Mendes and Troye Sivan concerts, handing out business cards to leave a tangible keepsake for those listening and building his brand from the ground up.

Shortly after the tour, he jumped in the studio with Jon Bellion and ended up earning a co write on the pop star’s debut album, New York Soul (Part II). This session would also open the door for Alec to join Bellion on tour directly after. With an insatiable urge to rise to the top, the tenacious prodigy found himself back performing in parking when he wasn’t on-stage opening for Bellion. Knowing that some of those fans would search for him after the performances, Alec made it his mission to consistently uploaded one new song every two weeks to his YouTube channel and build a catalog his fans could listen to. Within the span of six months, he logged over 165 shows and amassed 150K YouTube subscribers simply through perseverance and a D.I.Y. attitude.

Alec managed to hit even bigger strides in 2017 when his viral hit “I Built a Friend” ignited online, clocking nearly four million Spotify streams in under a year and earning airplay for millions of Americans on the national TV show, America’s Got Talent.

As for 2018, “Let Me Down Slowly” is the first single off Alec’s debut album that will herald a new chapter for the extraordinary story teller. Balancing relatable yet mature lyrical content with vitalizing production, he pleads, “Now, I’m slipping through the cracks of your cold embrace, oh please, please, could you find a way to let me down slowly?” atop a sentimental yet powerful drum-guitar ensemble.

While his story is certainly one of a kind, Alec’s narrative is only just beginning.

Sara Kays writes the songs she needs to hear. As if setting her diary to music, the Nashville-based solo singer-songwriter creates refreshingly honest alternative pop with her relatable storytelling.

While Sara eventually caught fire on social media, she kicked off her career in the most old school way possible. Receiving her first guitar as a gift at 12 years old, Kays often busked for two-to-three hours at local restaurants multiple times per week in high school. Becoming “a job,” she’d cover everything from “Champagne Supernova” by Oasis to Elvis Presley’s “Can’t Help Falling In Love With You.” The skilled performer also practiced constantly and developed her chops on acoustic guitar and ukulele. Her personal tastes spanned everything from A Day To Remember, Mayday Parade, and Panic! At The Disco to Alec Benjamin, Jake Bugg and Kacey Musgraves.

After meeting the producer Steven Martinez on Instagram, Sara made her way to Nashville to begin recording with him. Dropping “Rich Boy” in 2018, the rising artist has since amassed a loyal fanbase including 1.5M followers on TikTok. By sharing raw performances of her original songs about her own internal struggles, the 21-year-old artist began normalizing difficult topics, comforting listeners, and building an audience that functioned more like a supportive community.

“As a kid, I never had songs for what I was going through,” Sara admits. “I would search topics like ‘Body Image’ to find music, and nothing would come up on Google. So, I started writing about subjects that mean a lot to me. Most of my songs are about how it’s okay to be struggling, because I haven’t really gotten out of it—but it does get better. We’re all in this struggle together, and it’s all good.”

Last year, Kays unveiled her EP, Camera Shy which includes the emotionally vulnerable streaming favorites, “No Matter The Season,” “Smaller Than This,” and “Chosen Last.” Highlighted by the confessional single, “I’m Okay Though,” the EP also features new songs including “High School” and “Same House.” Camera Shy showcases Kays’ uniquely cathartic and catchy brand of pop which she writes and records all on her own. The EP, which has garnered over 15M worldwide streams to date, sees Sara turning her struggles with divorced parents, body image, and mental health into bravely candid acoustic songcraft that captures her personal fears while simultaneously offering listeners relief.

Towards the end of 2020, Kays performed a brief acoustic rendition of her then unreleased song, “Remember That Night?” on her hugely popular TikTok. The short snippet immediately blew up, garnering nearly 3M views and over 720K likes in less than a week. Following the positive fan reaction, she worked quickly to officially finish and release the song. Billboard instantly praised “the full-bodied nature of (Kays’) songwriting, which tells the story of post-breakup wistfulness while the vocals are layered during the most piercing stray thoughts.” The hit single proved a Top 40 favorite at Triple A radio outlets nationwide, becoming Sara’s first Top 10 single on any Billboard chart with over 180M global audio streams and over 7.7M views at YouTube. Celebrating her breakout success, the remarkable artist went on to make her U.S. television debut with a performance of “Remember That Night?” on The Late Show with Stephen Colbert – WATCH HERE.