Kerri Powers at One Longfellow Square 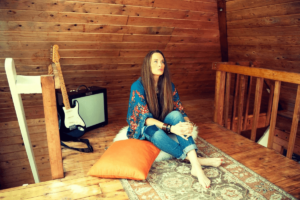 In her teens Kerri Powers began performing in local coffeehouses throughout New England. Standing ovations, encores and significant press promptly became the norm and led to invitational performances at the Boston Folk Festival, the Philadelphia Folk Festival and the Telluride Bluegrass Festival. All indications pointed to her firmly being on her way to establishing a legitimate career. However, amidst her ascent, cupid’s arrow struck, she fell in love, got married and the couple promptly had a child. Unfortunately her partner was less than supportive when it came to her continuing to pursue her music and, as tensions mounted, Kerri was pretty much forced to put her career aside.

“This restrictive situation ultimately caused me to lose confidence and question everything about my ability as an Artist. I wasn’t sure I would ever get back to performing, but I did continue to write. I wasn’t exactly sure what the driving force behind writing those songs was, but it kept me going. Music and art have always been a healing force in my life. I think most of us could say it has an incredible impact on us both personally and on a universal level.”

Fast forward: after raising her son and overcoming the hardship of a difficult divorce, Kerri embraced her passion and returned to making music. As a result, she released a self-titled EP in 2014 and started playing out again. Fact of the matter, the EP was produced simply for merch sales. Even so, she was encouraged to mail the disc to a host of radio stations that report to The Roots Radio Chart. Unbelievable as it seems, and with zero promotion or publicity assistance, radio re-acted and the little merch CD landed the #1 spot on the Roots Radio Chart….and many critics’ list of “Top 50 Folk Albums of 2014.”

This success enabled Kerri to tour throughout the United States as well as overseas. Once again, encores and standing ovations became the norm. As an added plus, individual tracks from her enhanced catalog ended up in the motion picture Chuck and both television series’ Rescue Me and Justified. Uplifted by the national and international response she then released a second “merch CD” titled Starseeds, although the Covid 19 pandemic cramped the world wide release, international promotion and the relative touring schedule that was planned. Like the rest of her comrades, she retreated to her home and the studio to regroup, write new material and look to the future. So get ready folks, there is more to come.

Gold Mine Magazine’s Lee Zimmerman writes : “Powers has come a long way since the days when she was admittedly hesitant about returning to music, but energy and persistence conquer all things.  It’s fitting that the Boston Globe proclaimed, “There’s an authenticity at work here, A heart-tugging gravity and a lively intelligence to go along with the sass.”

The Hartford Courant called her a “Mark Twain-like trickster whose wry words, dramatic sense of dynamics and supple phrasing can celebrate joy and hope.”