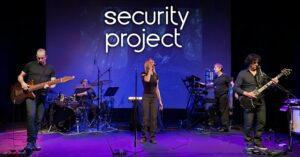 Security Project featuring Jerry Marotta, the drummer from Gabriel’s classic line- up (1977-1986), plus Trey Gunn from King Crimson, on touch guitar. Rounding out the band from Shriekback and Sky Cries Mary is Michael Cozzi on guitar and co- founder of Gig Performer David Jameson on keyboards and Eigenharp. The addition of Happy Rhodes, with her 4-octave vocal range, fulfills the band’s promise of re-envisioning the music of Peter Gabriel. Leave your expectations at the door and be prepared to hear Peter Gabriel’s genre-less music like you’ve never heard it performed live before.

“I was instantly brought back to the feel & the groove of those wonderful pre “So” tours. The man himself could not do better!” – Tom Lord-Alge, Grammy Award Winning Engineer & Mixer

“The Security Project live is a beautifully reverential and creative reinterpretation of these Peter Gabriel classics!” – Kevin Killen, engineer of Gabriel’s “So” record