I’m going to show you five works of art you by a Portland artist you might not have seen before!

Sarah Perea-Kane has been an artist from finger-painting to her BFA in Painting from the Rhode Island School of Design. She moved to Portland on a whim after graduating in 2012 and is unlikely to leave anytime soon. Sarah’s work is an astoundingly candid testament to the life of a young Portlander; she delves into everyday imagery for layers of comfort, grief and everything in between. 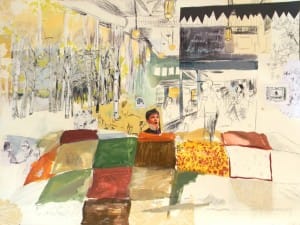 SPK: I’ve spent a lot of time in Portland drawing in bars. I like that people are quite comfortable with this; they don’t feel the need to sit still or look over my shoulder. A couple of my friends make appearances in this one. It started in my sketchbook and kept expanding.

This painting is a good example of Sarah’s typical way of working. She creates imaginary spaces out of real ones using paint, magazine cuttings, pieces of her sketchbook. The quilt leads to the interior of a bar in the West End, hinting at the ability to feel at home in places that aren’t. 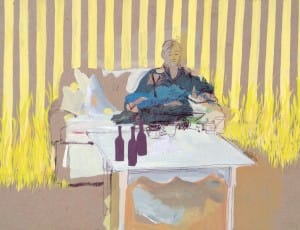 SPK: This is my friend Leif, we like to draw together. It’s important to me that I have friends like this. We can talk about art, or even just hang out and not talk at all.

Portland is known for a great art community, and this isn’t lost in Sarah’s work. She paints and draws people around her, documenting Portland’s creative energy in a mix of ballpoint, oils and collaged wine bottles. 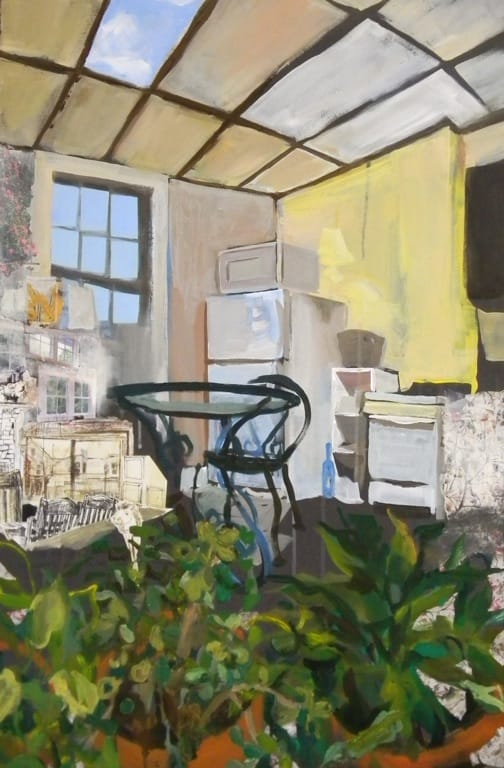 SPK: After my dad died, taking care of these houseplants that he gave me has become neurotically important. I’m not very good at it, an impatience that I got from him, but I can keep them alive.

Sarah’s paintings are slyly biographical. Her paintings draw meaning from the meaning of the objects in them. Plants are a common feature, sometimes as symbols of overgrown thoughts, sometimes as characters in her life story. Using these ambiguous objects, Sarah fully explores how we attach significant meaning to objects without confining the viewer to the meanings she  herself holds. 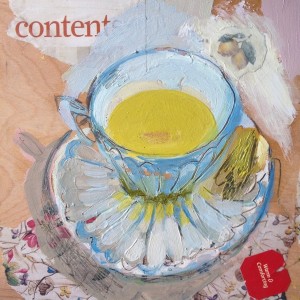 SPK: Lately I have been drinking a lot of tea. There is comfort in this ritual. I think of these scenes as tangible evidence of my grieving process – which I have been trying to make visible.

Her teacup paintings are another example of Sarah using objects for both meaning and their appearance. They are lovely paintings of beautiful things, but this work especially points conspicuously at the value of tea-drinking to the artist. One of the great things about this is that this meaning is relatable to anyone who’s found comfort in a cup of tea. 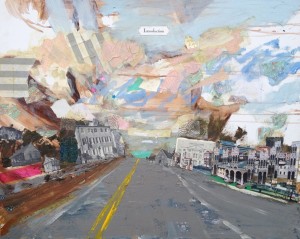 SPK: I have always loved driving. When I was a kid on long trips in the car, I’d daydream about making paintings like this. This point of view seems to work well as a framework for other thoughts.

This painting was shown in February in an exhibit at Common Street Arts in Waterville. Sarah deviates from often-used interior spaces to explore a different kind of home many can relate to: a car. The contrast between the order of the buildings lining the road and the mess of paint of paper in the sky nicely reflect the sense of calm and adventure you find in a car ride.

Sarah’s Blue and White Teacup has (unfortunately for us) been sold off the wall at Pinecone and Chickadee, where she was part of Eat More Art 2. She inhabits a studio at the Artist Studios on Congress Street, which will be holding an open house in the near future. Make sure to check out her work!