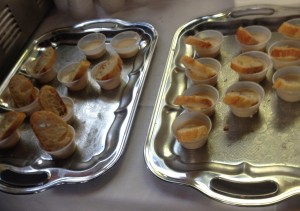 Like last year, I had the distinct pleasure of attending Harvest on the Harbor this year. Let’s just say, things were a little bit different. For example, the venue changed from a tent to a brick and mortar structure. Definitely a plus, because last October, things were extremely chilly! For another, they changed the name from the Marketplace to the Big Eat. But it was the same concept, and truly the best use of your money for the whole festival!

I have to say, I had higher hopes for this year, especially food wise. The foodie in me was hoping for the Portland favorites, like Central Provisions, Boone’s (although Chef Harding Lee Smith was a presenter during the Maine Lobster Chef of the Year Competition), or maybe Slab. Sadly, that wasn’t the case, though that’s not to say that what was up to sample wasn’t good. I can now say I’ve eaten a moose meatball and it was awesome.

There were definitely a few standouts for me that I’m still thinking about, even after my food coma ended and I went back to my regular life.

You know things are going to be off to a good start when there’s lobster dip, complete with bread for dipping, and chunks of lobster meat in your sample. Cook’s Lobster, if I ever make it out to Bailey Island, I know where I’m stopping for lunch! It’s not soup, it’s just a heavenly cream dip. The best things in life are terrible for you, unfortunately. 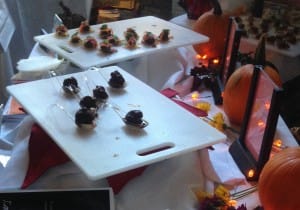 My next favorite are the aforementioned moose meatballs. Yes, venison is delicious, I’ll admit it. I’m still waiting for true Mainer status, but I must be getting close! These meatballs took it to the next level. They were lovingly prepared on a spoon, with a fluffy bed of mashed potatoes to rest on. Combine moose, mashed potatoes and the gravy in one bite and I was hooked. I wanted to go back for another spoonful but there was a line. Alas.

Next on the list of things that will make you hungry, pumpkin frozen custard from Thurston’s Wicked Good Burgers, which is located in Portland on Forest Ave. I actually did go back for seconds on the frozen custard, because it just tasted like the Midwest. It’s not super popular out here and I can never figure out why. I say the word Culver’s and people look at me like I’ve lost my mind. But this frozen custard was almost like eggnog in flavor. So it’s like a combination of Thanksgiving and Christmas in your mouth, all at once. It doesn’t get much better than that! 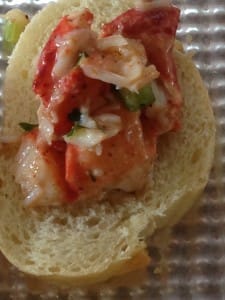 To finish it all off and make you want to claw at your screen, take a look at this heavenly piece of Get Lobster.com’s curried lobster rolls. This was truly the best thing I had all day. I started with it, and I ended with it as I waddled out the door Saturday afternoon. I mean, you really can’t go wrong with lobster from Maine, and if everything they sell is this fresh, I can see why out of towners are ordering their lobster like it’s going out of style!

So long Harvest on the Harbor, and until next year!