Hop into a Pedicab and Experience Portland on Three Wheels 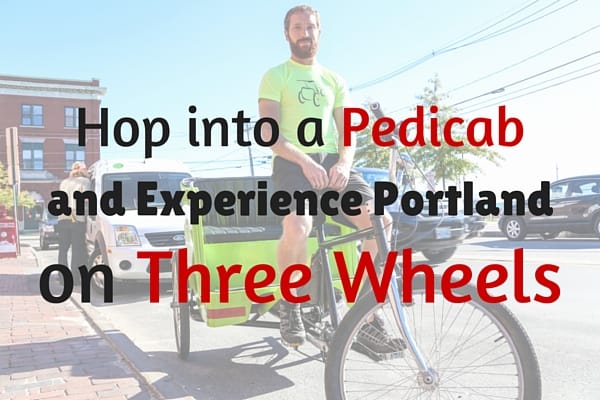 If you’ve spent much time in the Portland Old Port this summer you’ve probably seen one of Maine Pedicabs’ bright green bicycle taxis gliding by at some point. The company opened up shop here in April of 2012 and currently has a fleet of eight pedicabs ferrying locals and tourists alike to their destination.

Half of the fun of choosing a pedicab over a more traditional travel method, such as a taxi or an Uber, is the experience. In fact, they actually don’t even call it transportation, it’s “transportainment!” according to the Maine Pedicab website. As Maine Pedicab general manager Joe Dunham-Conway explains, pedicab riders are a combination of athlete, salesperson and tour guide, which means in addition to being in good physical shape and able to ride a bike (well, technically a tricycle since it has three wheels) for eight hours a day, you also need to have an outgoing personality and be good at engaging with people to be a successful pedicab rider. 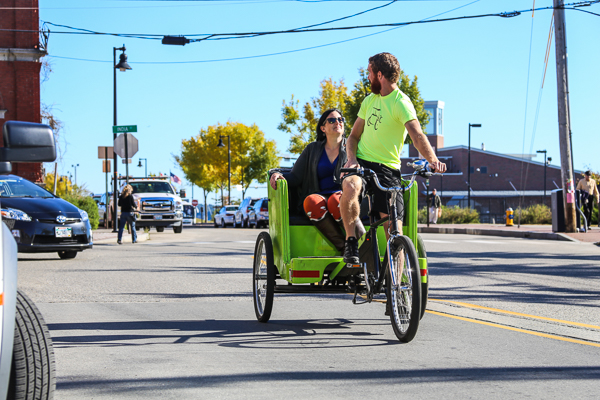 Another thing that sets the pedicab experience apart is the fare – it’s pay what you want. Essentially you tip your rider whatever you think is a fair price for your trip. “We don’t set fares,” says Joe. “We work for whatever people feel comfortable giving us. It’s a good model because most people tend to be fairly generous. Cruise ship passengers are typically looking to take a longer sightseeing tour of a half hour, one hour or two hours, so will give them some guidelines but we are flexible as we prefer to have the business rather than have someone walk away.”

And speaking of work, pedicab riders working eight-hour shifts are performing at the level approaching a pro athlete says Joe. In order to meet the physical demands of the job riders need to hydrate and consume a lot of calories, typically around 5,000 a day.

Joe took over as general manager of Maine Pedicab this year and handles a lot of the day-to-day duties of the company, such as recruiting new riders, and also rides full time himself. Joe says the number of riders working on any given day fluctuates. On a slower day it might just be one, and on a busy Saturday as many as five or six pedicabs will be out on the road. Due to the seasonality and flexibility pedicab riding offers, there are a wide range of people who become riders, with many choosing to ride part time, necessitating having a large pool of riders at the ready.

“We try to get the word out that we are always looking for new riders,” said Joe. “A lot of riders come from word of mouth. We also use Craigslist or referrals from other riders to build up as many people as possible because for many riders it is a part time job. It’s also a seasonal business, so our riders will change from year to year.”

Joe says there are no official months of operation for Maine Pedicabs. “The season is weather dependent, so it starts when riders feel comfortable getting out there, and carries through the fall since we get a lot of tourists who come to see foliage or visit Portland. Cruise ships are a big part of our business, but we are always looking to build up a good relationship with the locals as well and not just rely on tourism to support our company.” 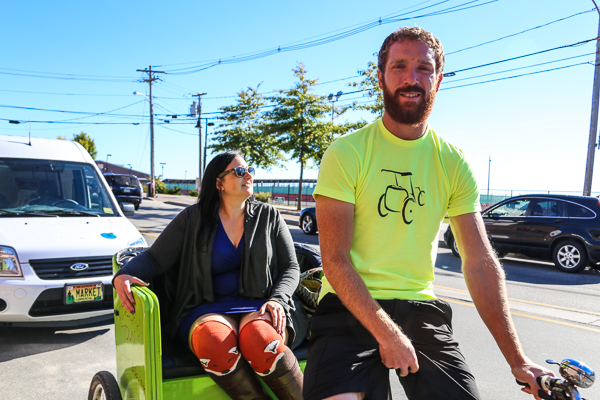 While most locals are simply looking to get from point A to point B – usually a trip to a restaurant or back home to their house or apartment – tourists are usually looking for a longer experience, and will often book a sightseeing package with their pedicab rider instead of one specific destination.

“A lot of tourists want to know the history of Portland, or just want to sightsee,” said Joe. “On a cruise ship day we will typically see a lot of older tourists who only have a short period of time to see the city and walking it may not be viable. They will get a lot more value from a half hour on a pedicab versus an hour of walking. Our riders know the city pretty well and can provide a lot of information.”

While there are not set boundaries as to where the pedicabs will travel, Joe says most riders tend to stay in the general Old Port vicinity, and while they don’t frequently venture off the Portland peninsula riders are not opposed to going further if people feel ambitious. “We constantly get asked if we will take people to Washington Avenue, which we do. A couple of our riders have taken passengers to St. John Street in the West End, and of course we take people to the East End as well. Munjoy Hill is tough, but you get used to it, you just take it very slow and steady.”

Other off-peninsula or unusual trips riders have taken passengers on include a ride to the Portland Jetport, and a birding expedition.

“One recent passenger I had was a gentleman who was just interested in photographing birds of any type. I took him on a three-hour tour one morning. He just hopped out whenever he wanted and took pictures. It really is a unique way to see Portland. I also took a couple celebrating their 60th wedding anniversary to Fort Williams in Cape Elizabeth. I gave them a ballpark of an hour and a half, but between stopping to sightsee and eat lobster rolls – plus it’s 13 miles roundtrip – it ended up taking closer to 2.5 hours,” said Joe. “It was unique being out at Fort Williams, and it gave me a chance to expose the company to a different group of people who might not have seen our pedicabs before.”

Joe says there is no typical customer, and you can never predict who is going to hop into the back of your pedicab next. For him, the unpredictability is part of the appeal.

“My favorite part of the job is working on a schedule that’s yours, it’s always changing and always unpredictable in a way,” he says. “Another part that’s great is you get to meet people from all over the world. I like that I get to communicate one on one and be outside and just kind of enjoying myself.”

When asked if he has a least favorite part of his job, Joe pondered for a minute before finally responding, “There is no real least favorite, it’s a lot of positives. Our riders like to have fun and that’s one of the things about this business – it’s work, and it’s hard work, so you put in your hard work while also creating a small community with the other riders that are out there.”

If you are interested in getting a ride, booking a sightseeing tour or becoming a rider yourself you can find Maine Pedicab online or give them a call at 207-430-7011.