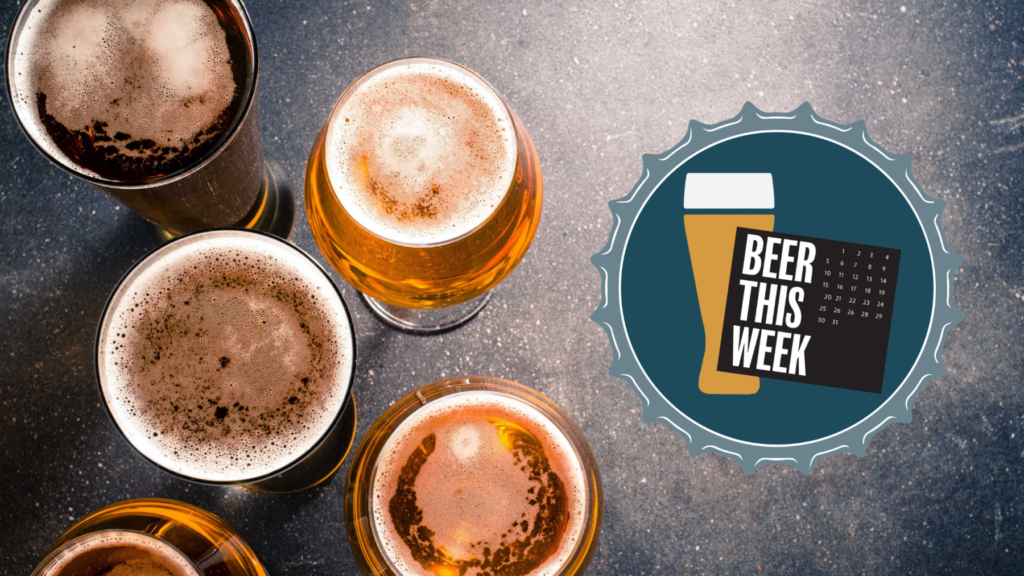 We’ve got so many fun releases coming out this week with creative ingredients that run the gamut from peanut butter to Swedish fish, and can art featuring everything from fancy felines to flightless birds.

In a time when we can’t always see our friends and the weather can be a bit…grim, it gives us a lot of joy to see the fun (and tasty) innovations being created by our Maine brewers (and can artists). We hope that you enjoy this week’s rundown of beery goodness as much as we do!

Blaze Brewing is coming out, uh, beers blazing this week with four new releases today, including a DIPA and three iterations of their Imperial Stout. Both Definitive Brewing and Norway Brewing are dropping IPAs this week, Mast Landing is ready to “Wake” you up with their new Pale Ale, Allagash Brewing is getting “spicy,” and SoMe is bringing back their beloved Peanut Butter Whoopie Pie Stout, as well as a Pilsner. 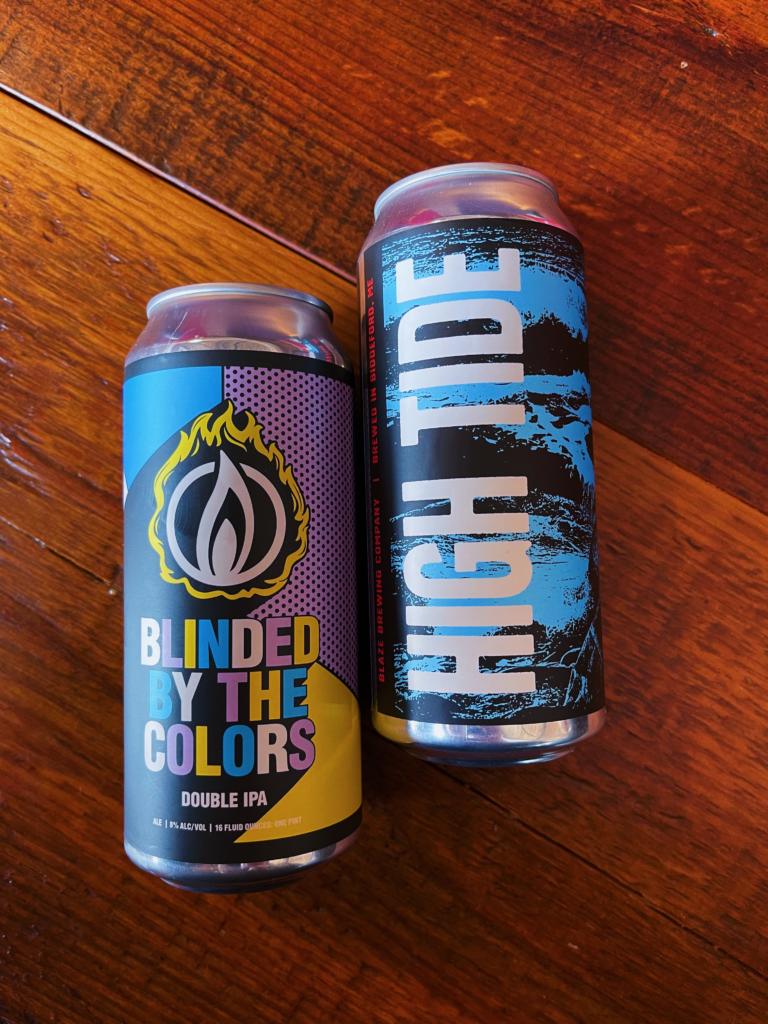 Blinded by The Colors (8%) is back! This Double IPA features Citra, Mosaic, and El Dorado hops.

High Tide (8.2%), an Imperial Stout, is now available in cans for the first time.

King Tide (9.5%) started out as Imperial Stout High Tide, then was aged in select bourbon barrels for close to 10 months. 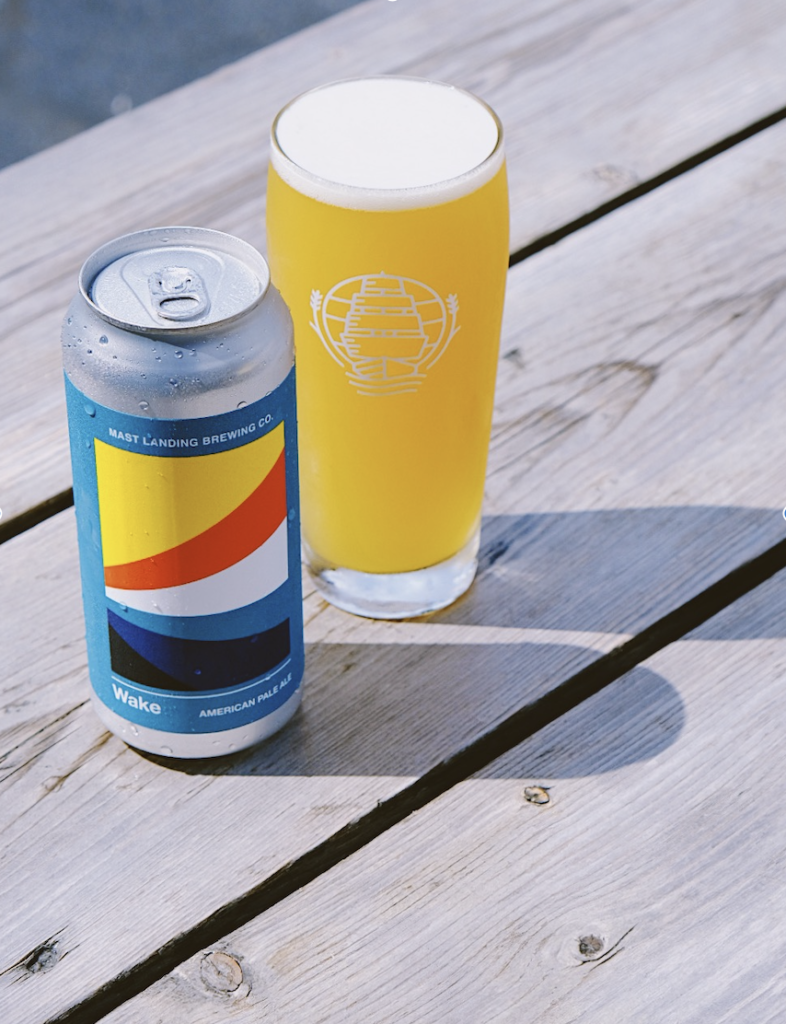 Are you ready to open your eyes to a rush of Citra and Amarillo? Wake is effortlessly drinkable, with the surging force of two colossally flavorful hops behind it. Balanced, bright, and refreshing. 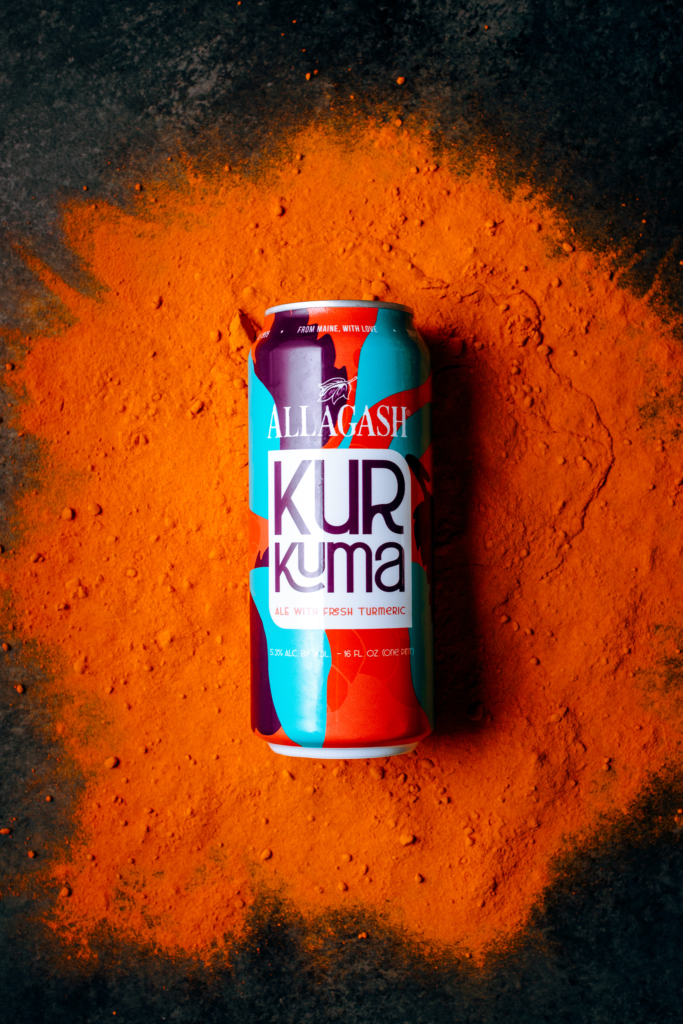 Turmeric, or “Kurkuma,” adds a hint of spice to this tropically crisp, Saison-style Ale. Brewing with the whole root lends all of the subtle aspects of fresh turmeric — its earthy notes and color — to Kurkuma’s dry and refreshing profile.

This strawberry lemonade IPA was brewed with the fine folks at Vacationland Distributors. Guaranteed to give you summer vibes, even in the middle of winter. 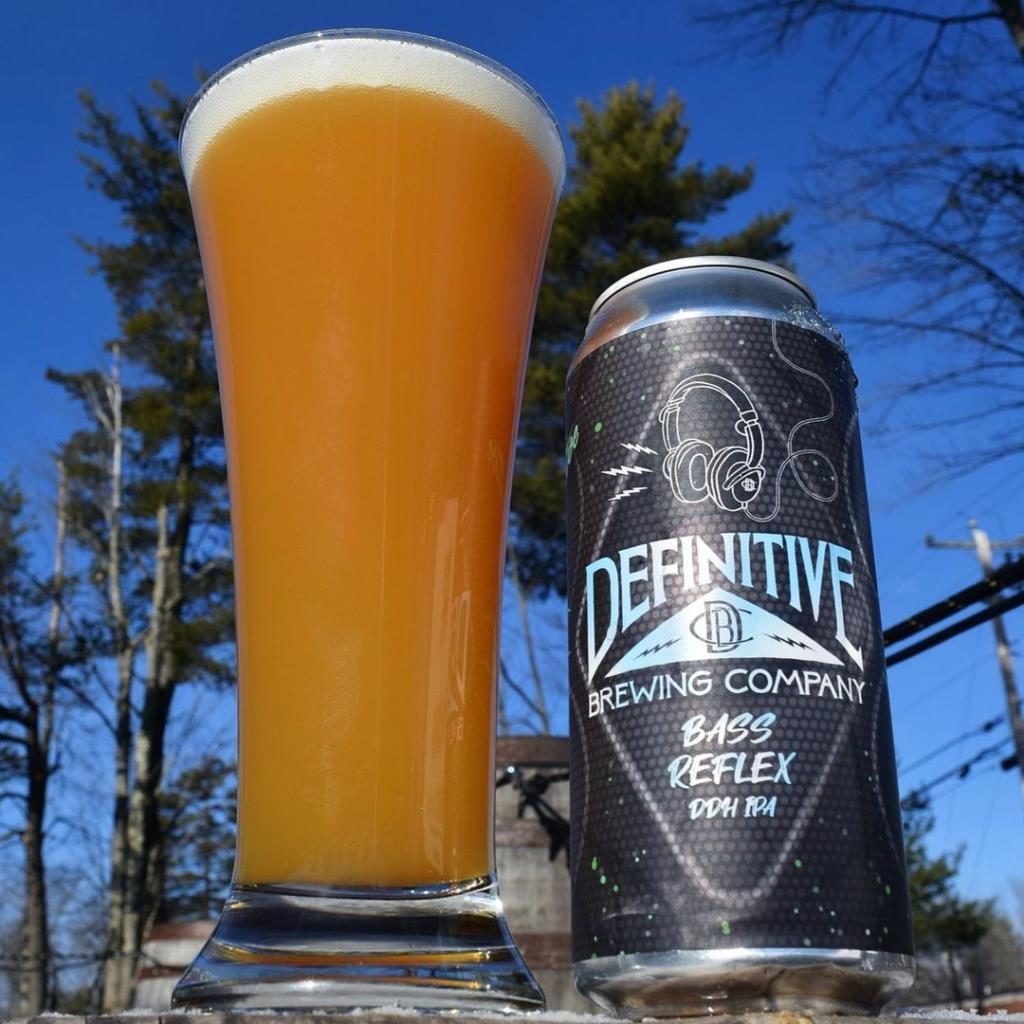 Who’s ready for a bass drop? Bass Reflex, a DDH IPA with Citra, Cascade, and El Dorado hops, is coming back this weekend! This IPA is classic New England-style haze-boy, with hoppy flavors of grapefruit zest, tropical flora, and sweet watermelon. 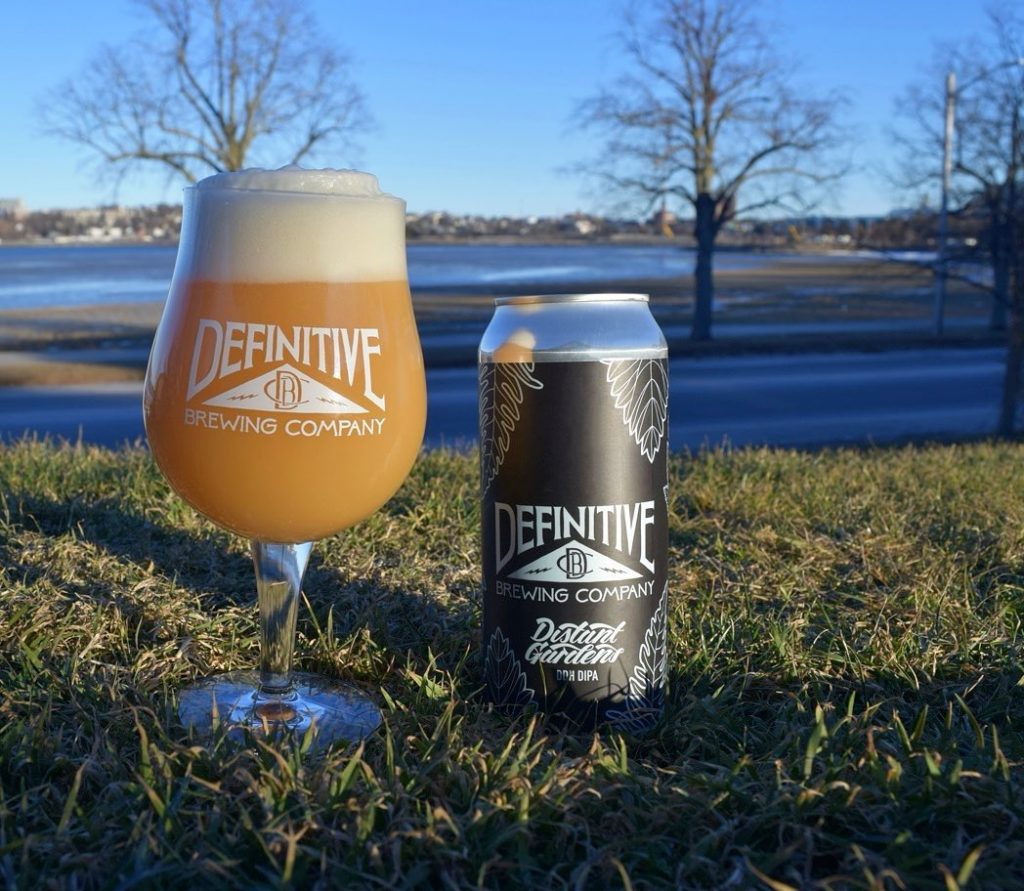 Distant Gardens is also arriving back in taprooms this not-so-distant weekend! This DDH DIPA is hopped exclusively with Southern Hemisphere hop varieties Kohatu, Motu, and Topaz. Distant Gardens smells and tastes like purple globe grapes, orange juice with extra pulp, and melted melon sorbet.  Both beers are available on Friday in Portland and Saturday in Kittery.

Norway Brewing’s bestselling collaboration with Graff Brygghus is back! Originally brewed in Tromsø, Norway, this IPA with Swedish fish, peach rings, and Citra and Mosaic hops is a tropical fruit bomb bursting with super-peachy candy aromas. 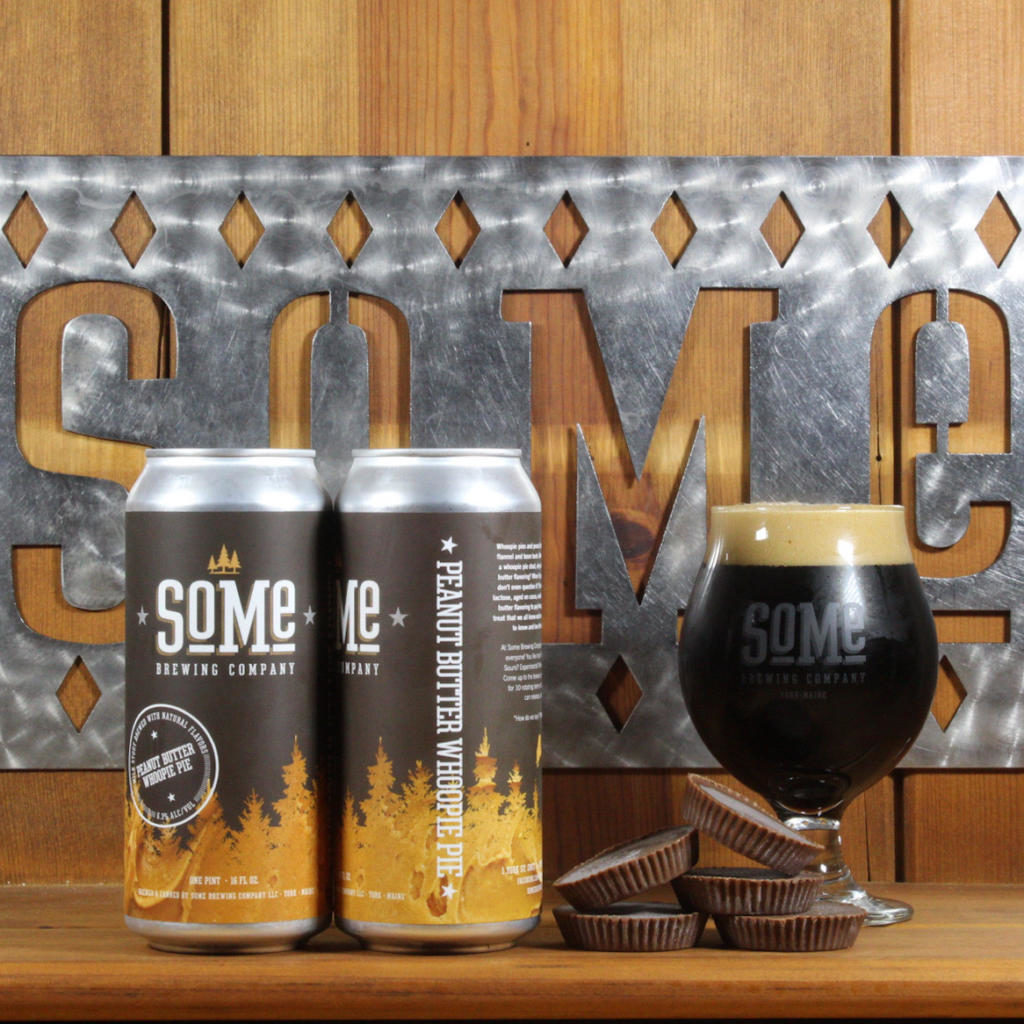 Whoopie pies and peanut butter go together like flannel and Bean boots. So, when you already make a Whoopie Pie Stout, why not add a peanut butter twist? When it’s your wife’s idea, you don’t even question it! Peanut Butter Whoopie Pie Stout is brewed with lactose, aged on cocoa, vanilla, and natural peanut butter flavoring to pay homage to the decadent treat that we all know and love. This was packaged on Monday and should be available soon. 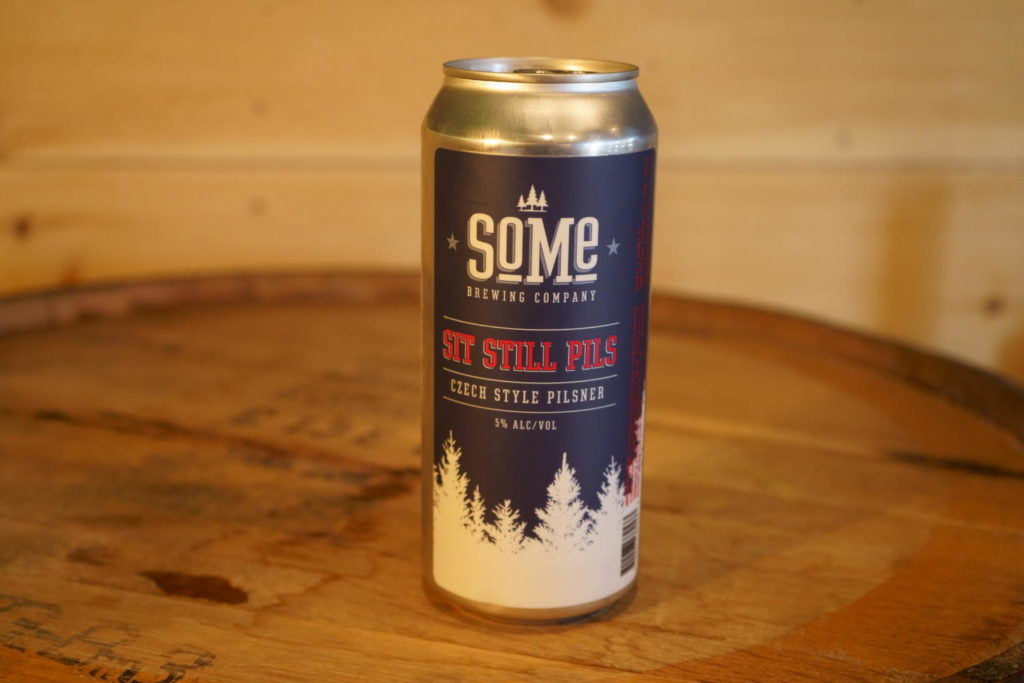 Sit Still Pils is a light, delicate pilsner balanced by a mild bready sweetness and spicy, floral hop notes. It will likely be available on tap today, Thursday.

It’s really gone to the dogs. And cats. And birds this week. We’ve got can art graced with chickadees, kiwis, a fancy feline, and some pooches enjoying pizza and beer. And if that’s not enough, there’s some skeletons shaking their groove thang. 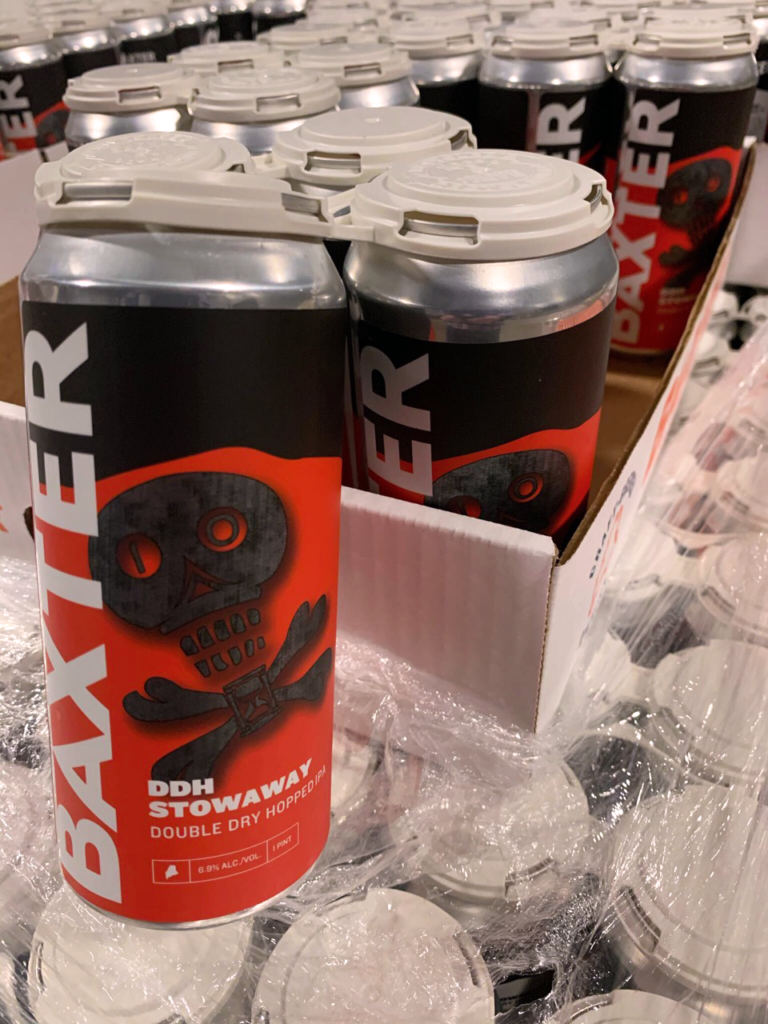 To celebrate their Tenth Anniversary milestone, they decided to take their beloved flagship beer, Stowaway, and amp it up to… well, ten! That included doubling the hops in our original recipe. With 10 hop varieties, DDH Stowaway gives you all the grapefruit and pine you expect from this Maine classic, while the second dry hop presents lots of pineapple and melon with floral notes. The result is a bold, in-your-face experience of 10 years in the making! Available now for a limited time, exclusively at The Pub by Baxter. 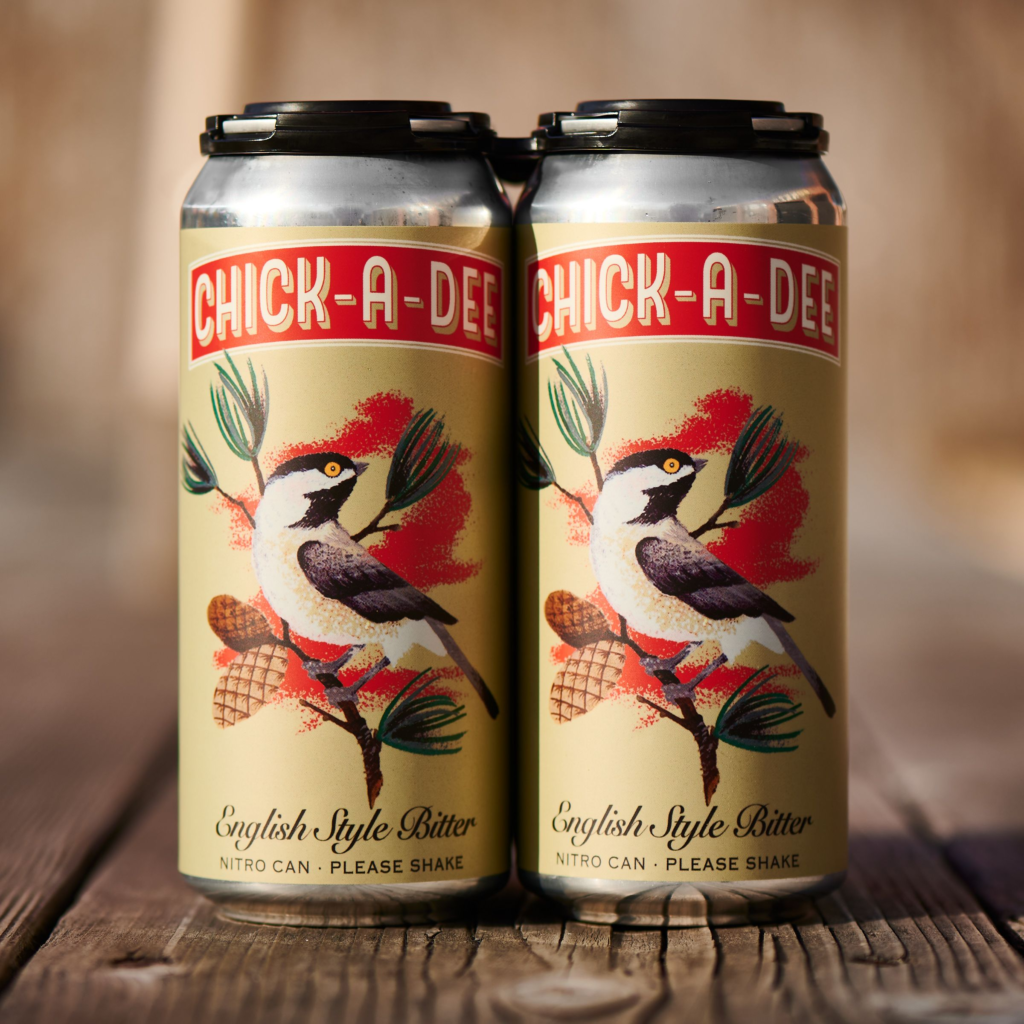 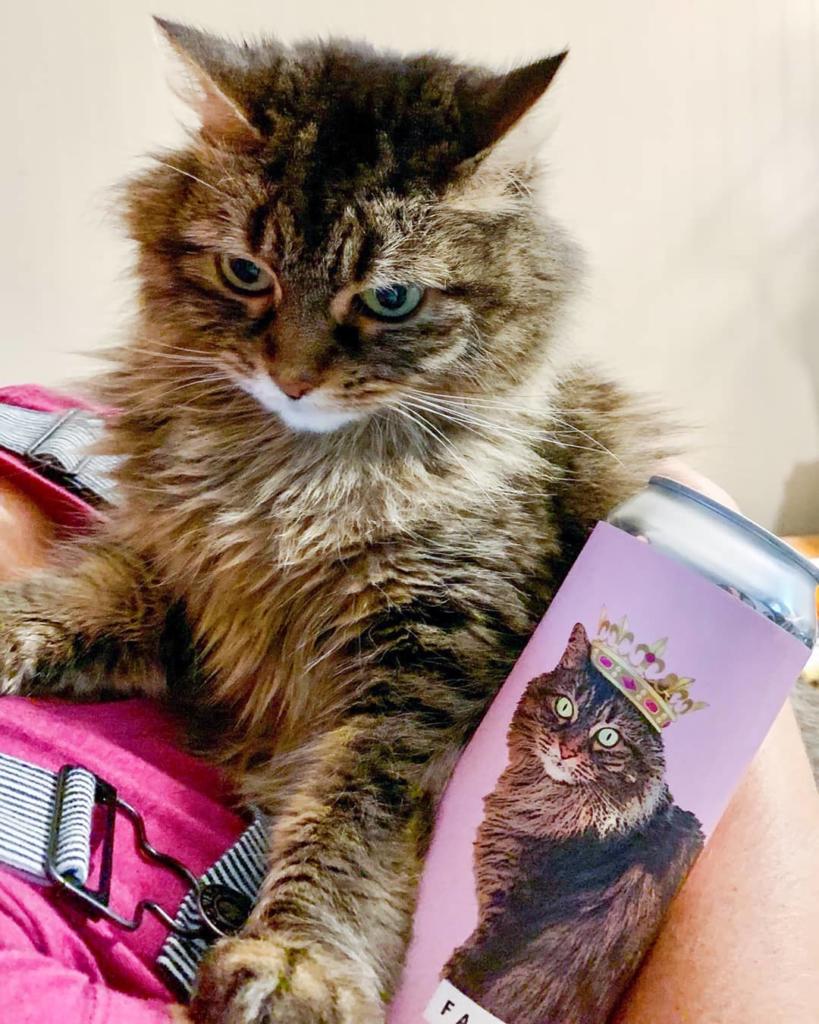 Fancy Francine is a Brett Saison conditioned with sauvignon blanc grapes; aged on French oak. Pictured on the can is the beer’s namesake, Francine herself. While she seems slightly unhappy that her doppelganger is sporting a regal crown, the Fogtown team knows Francine’s the real queen. 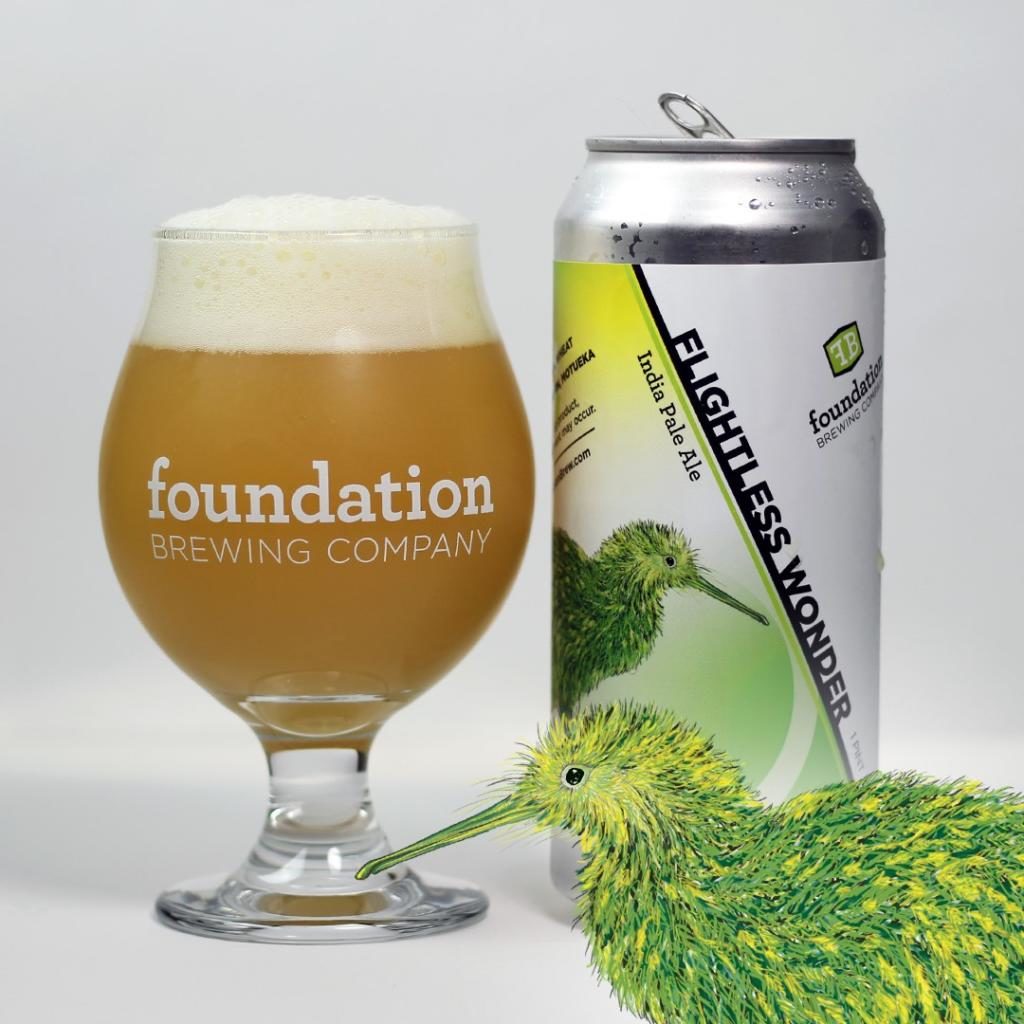 Our dear, flightless friend the kiwi is back as Foundation Brewing releases their second batch of Flightless Wonder into the world! This New England IPA is dry-hopped exclusively with New Zealand hops, brewed to highlight their unique and delightful character. Nelson Sauvin and Motueka hops bring big flavors of limeade, white grape, and apricot, making this IPA a true refresher. 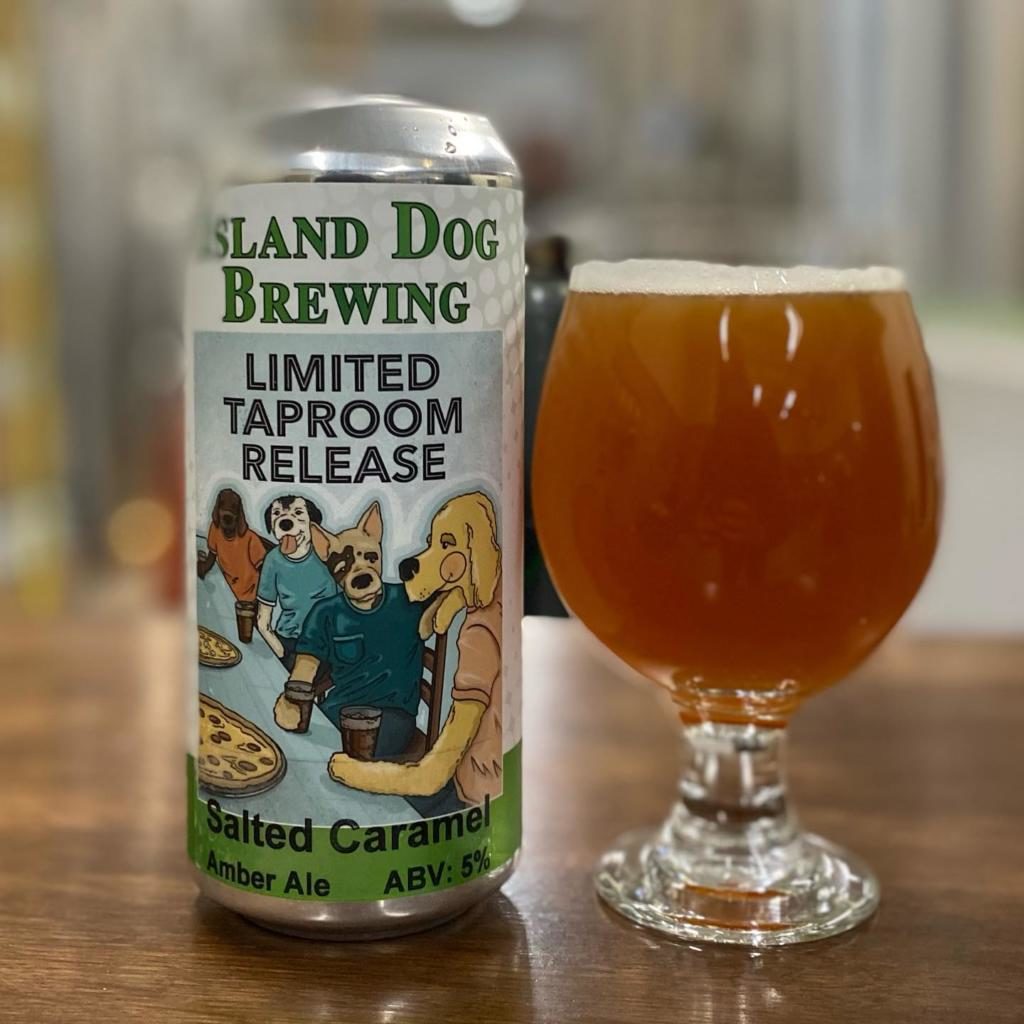 Salted Caramel is back in cans for a very limited time. It has caramel and pretzel flavors with a hint of salt and a smooth malty finish. 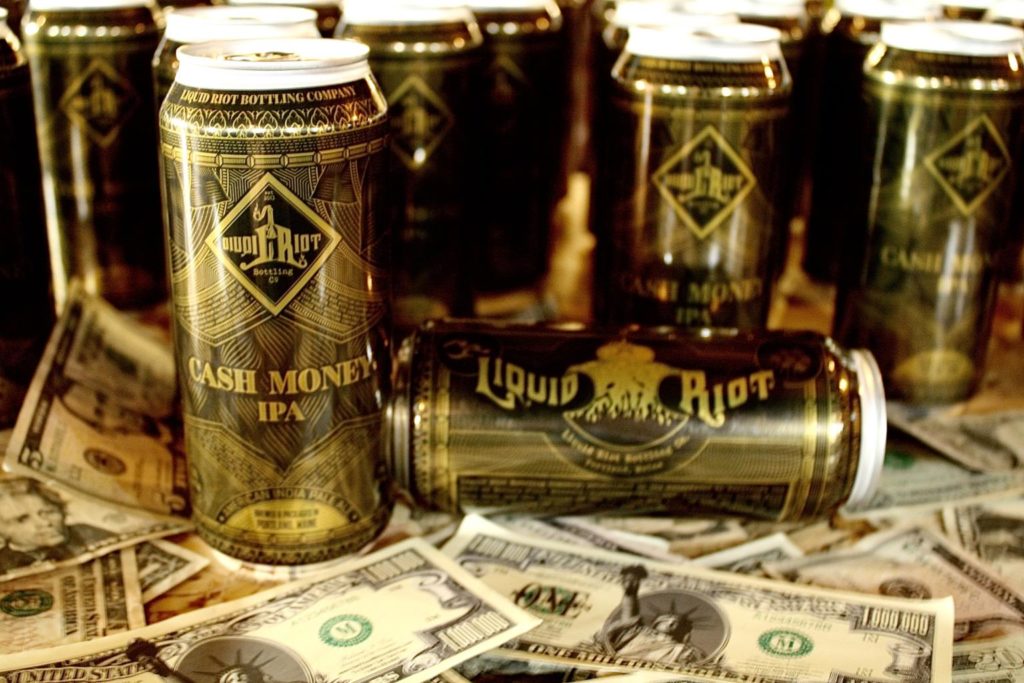 The new Cash Money has more dry hops, a softer palate, and a new yeast strain. It features bright tropical fruit, peaches, and melon with a soft bready finish. Cashmere hops are front and center with a supporting cast featuring Citra and Azacca. 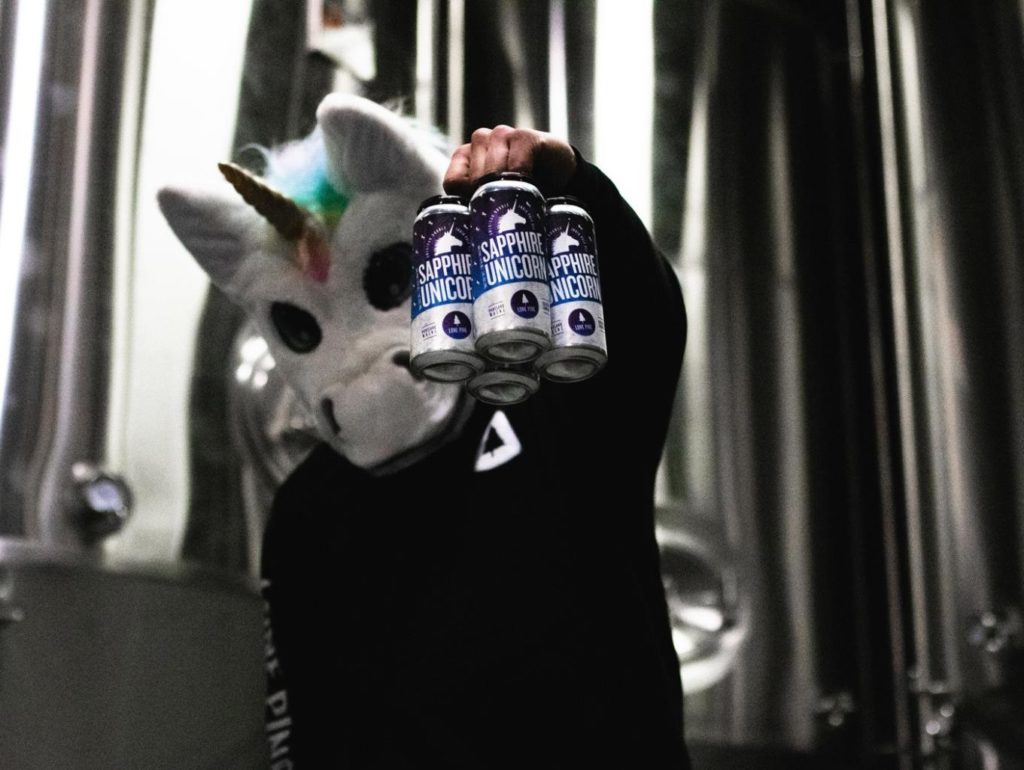 Sapphire Unicorn is an American Double IPA. A direct descendent of Diamond Unicorn, Sapphire Unicorn has joined the Sparkle Series with a supernatural array of sweet tropical flavors followed up by a splash of grapefruit. It’s hard to resist this DIPA’s unique aromas of coconut rum cocktail and papaya, making it a worthy addition to Lone Pine’s most enchanting beer series. 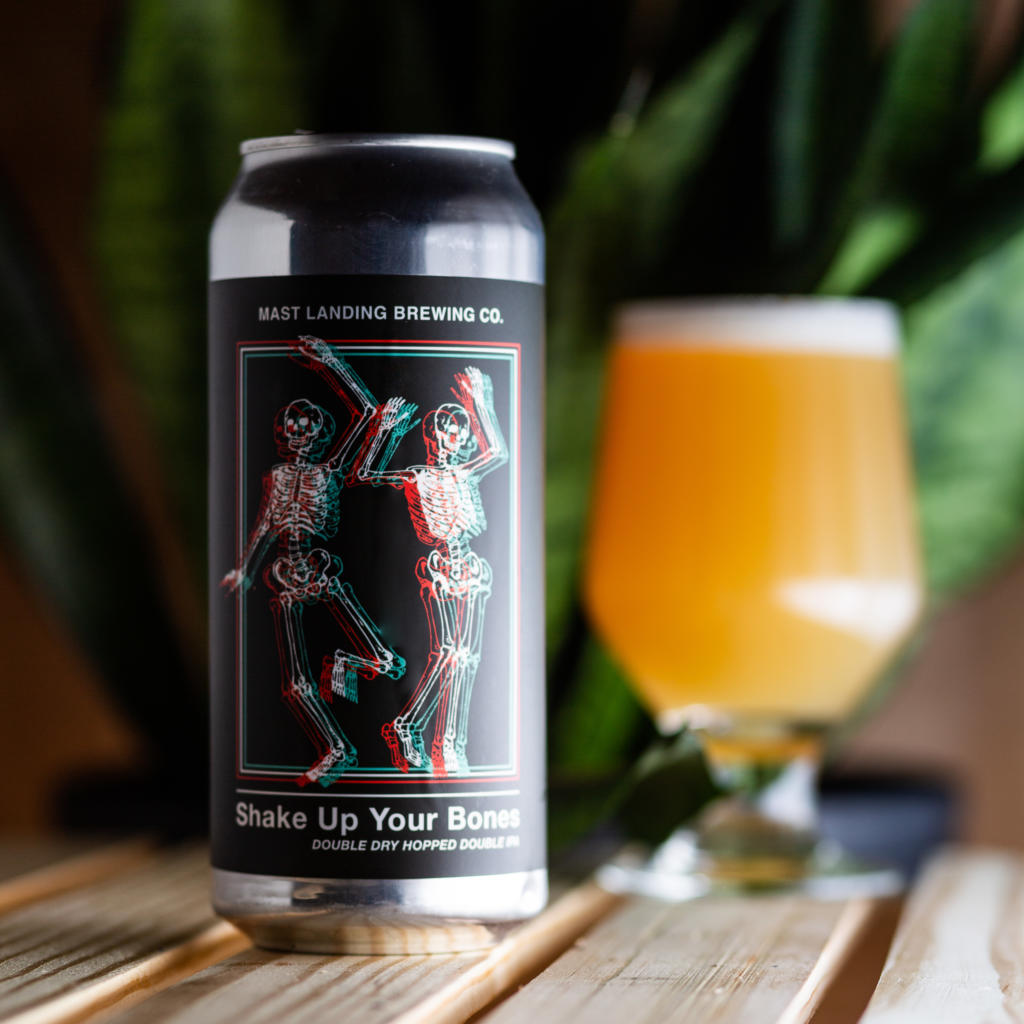 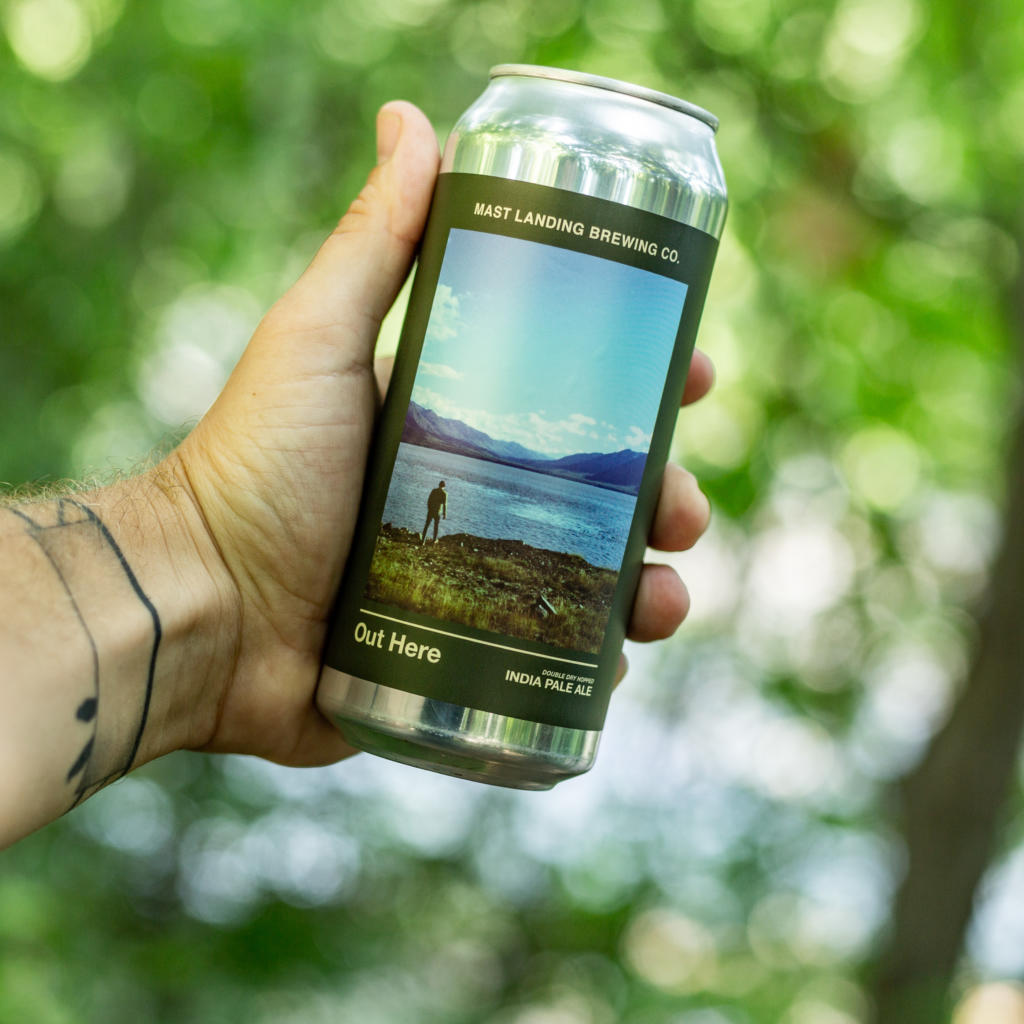 Sometimes you gotta “shake” things up. The luscious combination of Nelson, Simcoe, and Citra hops in Shake Up Your Bones, a hazy double IPA is a rush. It features big citrus notes and balanced juiciness that could wake up a skeleton.

Crafted to match whatever landscape you’re exploring, Out Here is a medium-bodied New England style IPA brewed with Citra, Simcoe, and Rakau hops. It has big notes of fresh citrus over a tropical foundation. 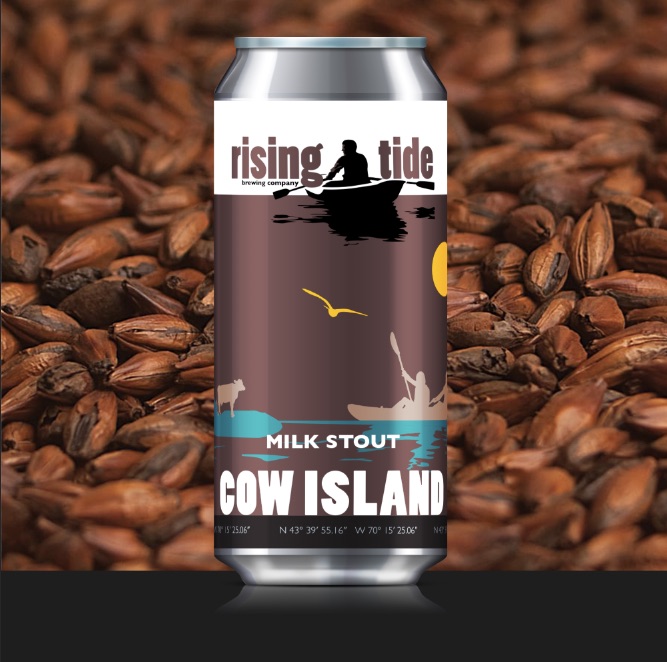 A fresh batch of Cow Island Milk Stout rolled off the line this week. Only released a couple of times a year, proceeds help support Rippleffect’s mission of developing youth leadership through outdoor adventure. 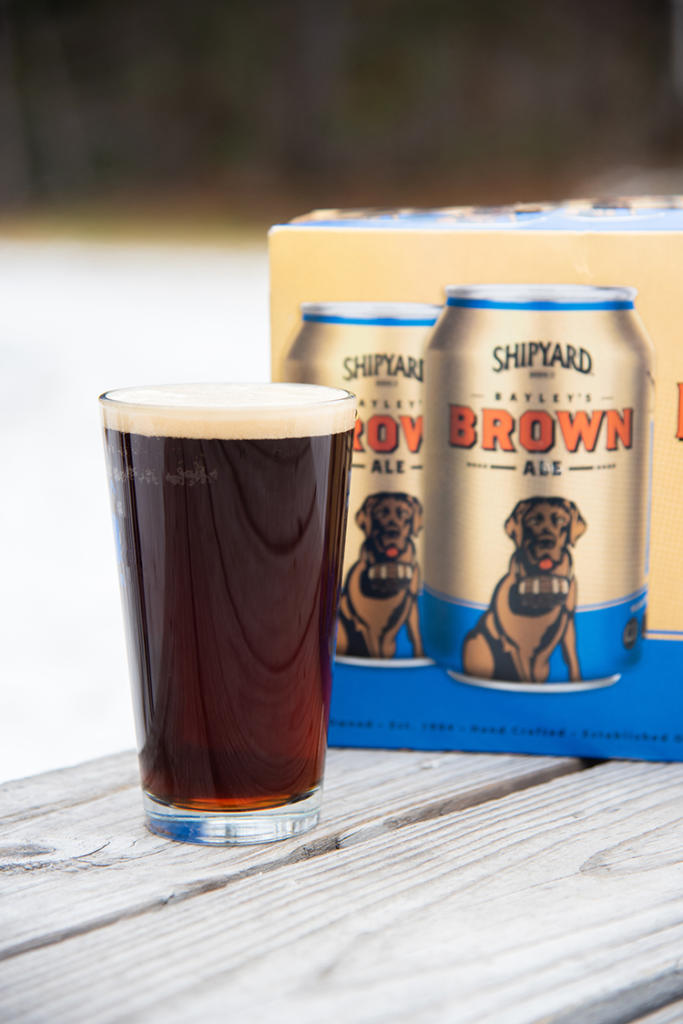 The Original Shipyard brew dog, Bayley, was a chocolate lab full of life and love for the sea. This is a classic English style brown ale with a medium body and rich notes of caramel, toasted nuts, and hints of chocolate. It’s wonderfully smooth with a sweet finish, a perfect winter brew for those who need a break from big hoppy IPAs. It’s brewed for the love of dogs and that feeling that someone loves you back unconditionally.

Side by Each Brewing

Brewed with Idaho 7 and El Dorado hops, this IPA has strong tropical fruit and citrus aroma, refreshing bitterness, and balanced by a dry maltiness. Available on tap in half and full pours and in growlers to go.

This beer represents a collaborative effort amongst brewers, hop vendors, and maltsters from one of the best beer communities in the world: Maine. While each participating brewery followed the same recipe to brew this IPA, each beer is unique. Available now for growler fills.

Maine breweries are looking forward to 2021 with a renewed sense of optimism, the Maine Brew Bus is teaming up with the Craft Beer Cellar for a virtual event, and Maine Beer Company and Allagash Brewing Company both received accolades.

Maine craft brew can-do: It was a bitter year, but they canned more, tweaked taprooms, and hung on

After a decade of stout growth in Maine, “the world came to a crashing halt,” as one Auburn craft brewer put it, for the craft brew industry and everyone else in the pandemic. Now many brewers are feeling better about 2021.

Things to Do: Beer, art, theater, and Zappa

Prince Percy Pilsner was the only Maine beer to make the list.