Harvest on the Harbor Celebrates Maine’s Dining and Drinking Scene 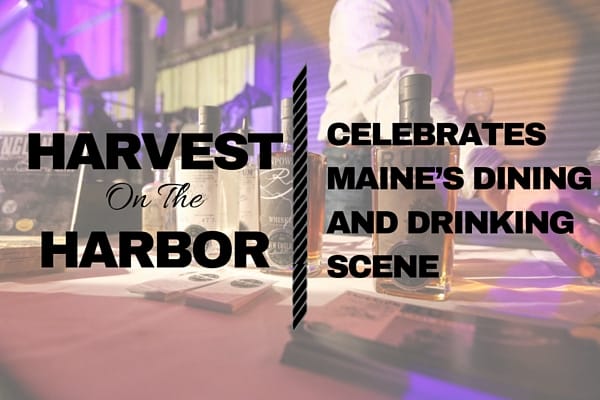 Portland’s annual Harvest on the Harbor took place October 21-25, 2015, drawing some of Maine’s top chefs, brewers, bakers, sweets makers and more in a celebration of food, wine, spirits and beer. Organized by the Portland Convention + Visitors Bureau, both locals and out-of-state visitors flocked to the events, with many traveling from throughout New England, New York, and several folks we bumped into who came all the way from Texas to dine, sip and rub shoulders with Maine’s top chefs and alcohol purveyors.

A new event, the Moonlight Gala Chefs on the Coast, kicked off this year’s Harvest on the Harbor at The Landing at Pine Point in Scarborough. The evening featured wines from Marchesi Di Barolo paired with five courses from local chefs, as well as music from Sly Chi, a funky yet soulful jazz band. Each dinner course was presented by the winery representative as well as the chef who created the dish. Haven’s Candies were also on hand to provide tasty chocolate treats. 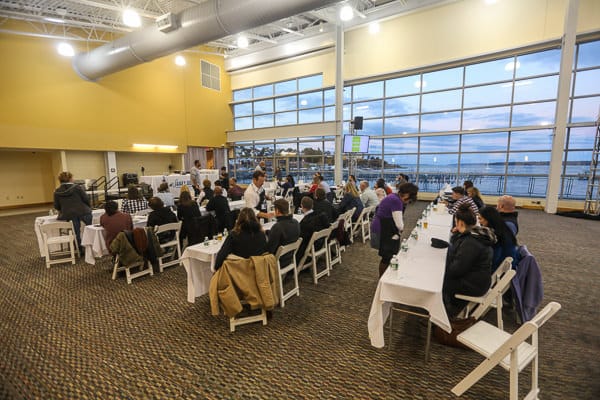 The second evening food and wine took center stage, literally, at The Stage Dinner at Merrill Auditorium – a six-course meal prepared by some of our state’s top chefs and served with wine personally selected by sommelier Erica Archer of Wine Wise Events. Some of the highlights included the “As You Wish,” a wood-roasted Francesca Farm buttercup squash with local greens, fig, coconut secret spice sauce, chicken cracklin’, shredded cuke, lemon and Headacre Farm Cilantro; grilled octopus with cous cous, and dessert – a maple almond buttercream cake with fresh banana, maple bourbon crème brulee and balsamic toffee almonds. The consensus from our table, which included PortlandOldPort.com staff and celebrity Chef Elliott Smith from The Food Network, was that the octopus was the standout dish of the evening. 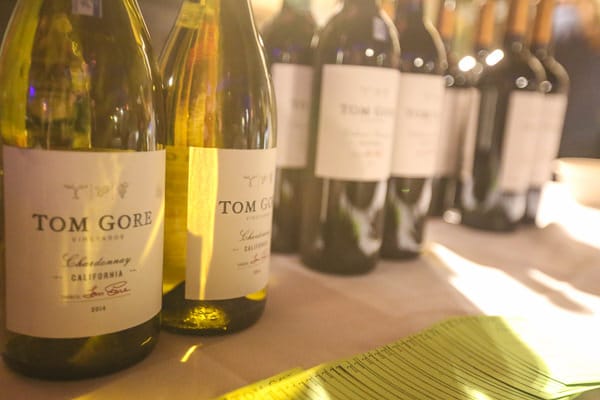 Friday, October 23 marked the busiest day of Harvest on the Harbor, with five separate events taking place, at times concurrently, forcing attendees to pick and choose. The most-anticipated event, based on the fact it was the first to sell out, was the Maine Lobster Chef of the Year, held at one of our new favorite event spaces – Ocean Gateway, which provides stunning views of Casco Bay. Chefs competed from Sebasco Harbor Resort, Union, Evo, The Thistle Inn and Mine Oyster, with Chef Matt Ginn of Evo emerging victorious for his Maine Lobster, Turkish Pasta & Local Beans. 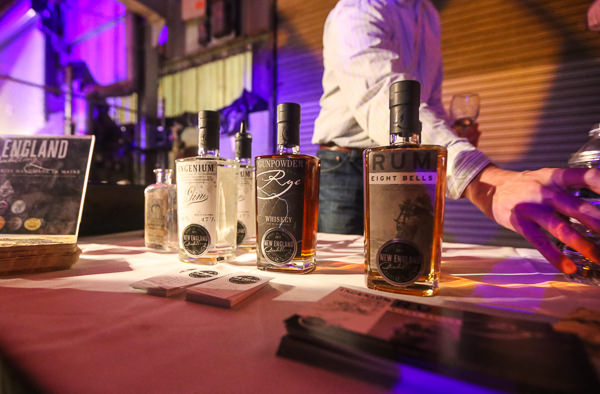 The focus in the evening primarily shifted to alcohol with three booze-fueled events to choose from: Vines to Wines a Wine Soiree followed by Custom Cocktails Mix it up in Style, both of which took place in the Custom House; and Suds + Cider From Hops to the Core, which was also held at Ocean Gateway. Vines to Wines was sponsored by Constellation Brands and focused exclusively on the wines of the Robert Mondavi Winery. Later in the evening spirts were the stars as bartenders from Zapoteca, Sur Lie and more were on hand to mix up concoctions featuring vodka, whisky and tequila. There was even a coffee cocktail from Coffee by Design featuring their coffee and Black Velvet Toasted Caramel Whisky. Our personal favorite was the SVEDKA Grapefruit Jalapeno Vodka cocktail by Joshua Miranda of Glass. Meanwhile over at Ocean Gateway, Funky Bow Brewing and Downeast Cider House took turns discussing their companies and their wares, providing some generous product samples and leaving lots of time with Q&A with the brewers and cider makers. 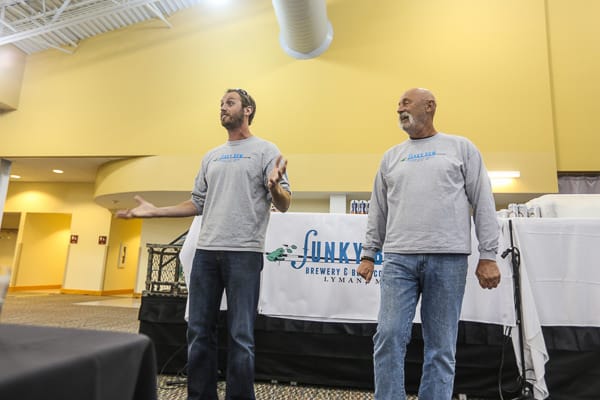 While there was still plenty of beer, wine and spirits to be had at The Portland Company, the next two events put the primary focus on food. Top of the Crop Taste the Farms of Maine rounded out Friday’s festivities, and featured delicious produce from the farms of Maine cooked by some of the state’s best chefs, including Chef Cara Stadler of Tao Yuan and Baobao and recently-crowned Lobster Chef of the Year Matt Ginn of Evo. Saturday, October 24, featured day and evening sessions for Maine Marketplace Taste the 8 Regions of Maine. The Portland Company was packed full of restaurants and specialty food companies from throughout the state offering samples of everything from soup to enchiladas to gelato to oysters to pizza to bread with goat cheese and wild blueberries. There were also plenty of alcoholic beverages to sample, including mead from Moonlight Meadery, absinthe from Tree Spirits Winery & Distillery and of course, plenty of beer and wine from local and national brands. It was difficult to leave the event not feeling completely satiated. 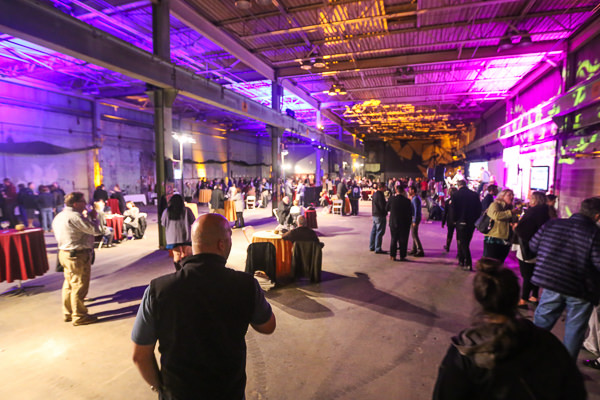 Harvest on the Harbor wrapped up with two final events – Harvest Hop Beer and Whiskey Crawl, which took place at Rising Tide Brewing Company and Maine Craft Distilling and taught attendees about brewing and distilling, and Rock ‘N Roast Barbecue and Brews, which, as you can imagine, primarily focused on barbecue, along with the comfort food fixings, like mac and cheese and coleslaw from The Thirsty Pig, The Black Tie Company and Moe’s Original BBQ. Attendees could wash it all down with a Cranberry Cider from Downeast Cider House, an Allagash Black, a Shipyard Smashed Pumpkin or a glass of wine from one of the various wine importers on hand. Other highlights included a corn hole game, which got a bit spirited at times, and the band Black Cat Road, who inspired a lot of folks we talked with to contemplate taking up the washboard as a musical instrument.

With so many great events to choose from, it can be tough to decide which ones to make it a point to attend, so if you are trying to decide for 2016, here are our top 3 recommendations:

If you want to stay in the know for next year, we recommend bookmarking Harvest on the Harbor’s website, and/or signing up for their newsletter to get updates on the 2016 events.