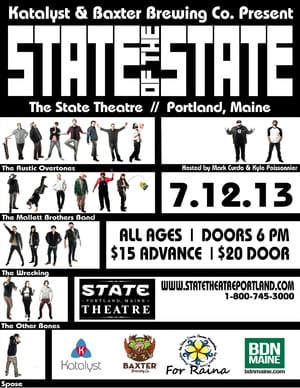 Are you ready for the biggest giveaway Portland Old Port has ever had? This week we’re teaming up with Portland startup Katalyst for an epic scavenger hunt to give away tickets to their July 12th State of the State concert! Katalyst, along with co-host Baxter Brewing, wants YOU to be at the State Theatre this Friday for what’s sure to be Portland’s concert of the summer. The all-star lineup includes The Mallett Brothers, Spose with Sly Chi, The Wrecking, and The Other Bones, plus the city’s very own Rustic Overtones will be back at State Theatre for the first time in 10 years!

The Scavenger Hunt will take place in the Old Port on Tuesday July 9 (5-7 PM) and Wednesday July 10 (5-6 PM). Check the Portland Old Port Facebook page at 5:00PM on these days for the first clue and the password you’ll need to say at each location, then race off to discover the other clues! If you get to the final location first, band members will be waiting to hand you a ticket! On Tuesday you’ll get to meet members from The Other Bones and The Mallett Brothers, and during Wednesday’s hunt you’ll meet Spose in person. Plus, we’ll be handing out gift certificates and other prizes throughout the scavenger hunt on both days. Every person who participates in the hunt will be receiving some type of prize!

Stay tuned for the clues and start studying a map of the Old Port – this is a giveaway you won’t want to miss!