106.3 The Bone Presents The HU with The Haunt at State Theatre 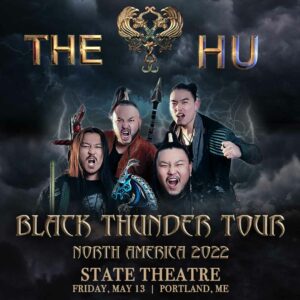 In 2019, an NPR story put a spotlight on “a band from Mongolia that blends the screaming guitars of heavy metal and traditional Mongolian guttural singing,” accurately highlighting the cultural importance and unique musical identity of The HU. Founded in 2016 in Ulaanbaatar, Mongolia, The HU, comprised of producer Dashka along with members Gala, Jaya, Temka, and Enkush, are a modern rock group rooted in the tradition of their homeland. The band’s name translates to the Mongolian root word for human being, and their unique approach blends instruments like the Morin Khuur (horsehead fiddle), Tovshuur (Mongolian guitar), Tumur Khuur (jaw harp) and throat singing with contemporary sounds, creating a unique sonic profile that they call “Hunnu Rock.”

Their debut album, 2019 ‘s The Gereg, debuted at #1 on the World Album and Top New Artist Charts. With it, the band have accumulated over 250 million combined streams and video views to date and have received critical acclaim from the likes of Billboard, NPR, GQ, The Guardian, The Independent, Revolver, and even Sir Elton John himself.

Proving their global appeal, The HU have sold out venues across the world in North America, Europe, Asia, and Australia, with scheduled festival appearances at Coachella, Lollapalooza, Download Festival, and more, creating a community of fans from all walks of life. They quickly grabbed the attention of the industry, leading to collaborations with Jacoby Shaddix of Papa Roach and Lzzy Hale of Halestorm. And most recently, the band received praise from fans and critics for their Mongolian rendition of Metallica’s “Sad But True,” which Metallica themselves acknowledged on their social media accounts, seemingly giving the band their official seal of approval. The band has also explored eclectic ways to reach audiences with their sound, most notably writing and recording music for EA Games’ Star Wars Jedi: Fallen Order.

Readying their next chapter as a global force, The HU are putting the finishing touches on their highly anticipated sophomore album, which is due for a global release later this year from Better Noise Music. The project will include a selection of tracks that were premiered live on the band’s critically acclaimed North American tour at the end of 2021, coinciding with their appearance on Metallica’s 2021 retrospective covers album The Metallica Blacklist, alongside other high-profile guest artists like Miley Cyrus, Chris Stapleton, Phoebe Bridgers, J Balvin, St. Vincent, and so many more. The HU’s forthcoming 2022 headlining tour will kick off with a special set at Coachella this April.

A swirl of Indie-Pop and Post-Punk with a devilish alchemy that summons both Blues and Beats, The Haunt wouldn’t be out of place at Vivienne Westwood’s late seventies London boutique; a new wave countdown on MTV’s “120 Minutes”; baking in the sun at Vans Warped Tour; or a dystopian dance club in space.

Anastasia Grace and Maxamillion Haunt, the teen duo at the core of the quartet, craft shockingly resonant anthems infused with wistful elegance and raw nerve. Barely old enough to drive in most states, Anastasia is possessed with a voice and sensibility beyond her years, an old soul somehow channeling a timeless essence, with powerfully mature lyricism to back it up. Enigmatic, esoteric, and charming, Anastasia doesn’t just “relate” to teenagers in The Haunt’s audience who have been bullied or otherwise shunned. She quite literally is one of them.

Songs like “Why Are You So Cold?” are filled with passion and ambition. Anastasia glides with relative ease between the otherworldly vibrations of soul siren Amy Winehouse or punk icon Siouxsie Sioux, woven through compositions akin to the time Black Keys collaborated with the RZA. The anti-bullying mini-movie music video that first introduced many to The Haunt, “All Went Black,” was originally penned by Anastasia as a deeply felt battle cry against loneliness and abandonment when she was just 12 years old.

The juxtaposition of Anastasia’s quiet offstage shyness with her commanding vocal preeminence is one of many artistic clarion calls beckoning an increasing number of likeminded devotees into the Haunt’s world. Her daydreaming quirkiness and vintage-meets-Victorian ambience strike familiar chords with those who yearn to live in the pages of Edward Gorey or the films of Tim Burton.

The Haunt is an invitation to the outsider, a blissful surrender to enchantment, melancholy, and disaffected beauty. It’s the soundtrack to the dark romanticism of otherworldly sentimentality. This is lush, theatrical, all-enveloping music outstretching its cold embrace to the overlooked, the exiled, and the castaway.

National Barbecue Day is officially upon us! 🔥🥩🥓 Here's our list of the amazing barbecue restaurants Portland has to offer.