Dancing in the Dark

When it starts getting dark out at 4:30 in the afternoon, the only feasible way of getting your daily dose of Vitamin D is the inclusion of lights and music in your routine.  For this I recommend strobes, loud beats and crunchy guitar riffs.  This week you can get all three without going very far from home! 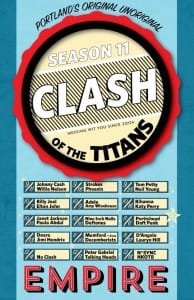 Empire’s “Clash of the Titans”

Located at 575 Congress St., Empire’s offering a show every week this winter and the Clash of the Titans is always a good time.  This week Daft Punk and Portishead tie their synth-beats together.  One is a depressing and angsty rumble through crashing bass lines, the other is Daft Punk.  Both generate their music by using computers so expect no one and nothing to actually be on stage.  Cover is 6 bucks.

The first concert is Friday, November 8th and will feature a performance by Matt Nathanson.  Nathanson is known for his catchy guitar riffs and simple structure.  He’s what would happen if Sheryl Crow had a child with Steve from Blue’s Clues.  Tickets are 20 dollars and if you have a 15 year old tween daughter, go ahead and drop her off and enjoy the silence.

I have a serious problem with Canadian bands.  Alanis, Rush, Tegan and Sara, and Metric.  Where the hell is all this talent coming from?  Can I go to there?  Metric arrives in Portland on the 16th bringing with them their new release, “Synthetica.”  They sped out of Toronto with their first commercially successful release, “Live it Out,” and are steadily gaining American fans.  Their new album doesn’t shy away from the increasing hype.  Ticket is 30 bucks.

If titles alone could sell seats then good luck beating The Maine Beer, Chocolate and Music Night; featuring delicious chocolate, delicious beer and two delicious locally grown bands, this is something you must attend and tickets are only 10 dollars.  The Kurt Baker Band is fronted by the Portland native Kurt Baker and yes, he’s the same guy from The Leftovers; and yes he still sounds like Power Punk meets 60’s surf guitar.  The Ghost of Paul Revere is a melodic and charming band originally from all over Maine but condensed and distilled by Portland.  Folk melodies and backwoods rhythms certainly will remind you of Americana Rock and it should, that’s what it is.  Doors open at 7 on Saturday, November 9th.