Find Your Future in the Old Port at Psychic Readings 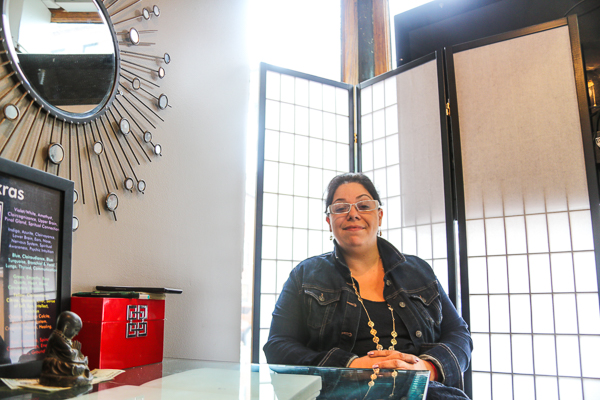 If you live or work in the Old Port you’re probably like the staff here at PortlandOldPort.com and have walked by the Psychic Readings storefront on the corner of Exchange and Fore Streets hundreds, if not thousands of times without ever setting foot inside. While meandering back from a coffee or lunch run we’ve often speculated about what happens at a psychic reading. Is there a crystal ball? Do they use tarot cards? What exactly is going on in there anyway?! And with a sign proclaiming you could get a reading for only $10, curiosity finally got the better of us and we booked a session.

Psychic Readings is currently staffed with two psychics – Jules, the owner, and her assistant and fellow psychic, Lisa. After talking with Jules and mentioning we wanted to book four readings and also conduct an interview, we reserved a spot for the next day. At the appointed time we headed down, giddy with excitement to see what the future holds in store for us.

Our psychic for the day was Lisa, who has been foretelling the future at Psychic Readings for one year. Originally from California, Lisa has been working as a psychic for 27 years. She says that like all the women in her family, she was born with psychic abilities.

Lisa explained the various reading and pricing options available to us, which included palm readings, which focus on a person’s character, personality and future; tarot cards to learn about love and relationships; psychic readings, which touch on the past, present and future; and the advertised $10 special which entitles you to ask any two questions your heart desires. Since we had not been apprised of this prior to our visit, there was some quick scrambling as we quickly tried to think of what two questions we most wanted answered. 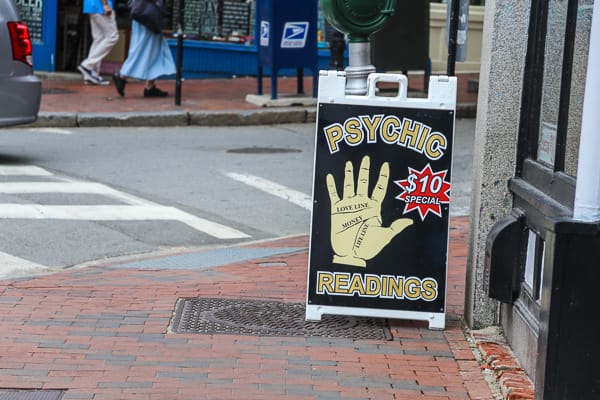 After a brief huddle, I decided to go first. As I took a seat in her parlor Lisa shut the door, blocking out our voices from my colleague in the waiting area. Lisa immediately put me at my ease, and I felt relaxed and comfortable asking my questions, even though it felt a little strange getting a psychic reading for the first time.

Since I knew I would be writing about my experience I steered far clear of relationship questions, for which I’m sure my boyfriend is grateful, and instead asked 1. If I would ever have children, including the options of biological, step or adopted in my question, and 2. If I would ever live overseas. I have a vague desire to do both, but not an overwhelming one, so I figured I would be fine with whatever answers came my way.

After my first question, Lisa asked to look at my hands and said she saw two lines, and predicted based on the look of the lines that I would have two biological children of my own someday. Given my age and family history, does that mean twins are in the cards for me? Gulp. As for my second question about living overseas Lisa was pretty quick to break it to me – not going to happen. She said she foresaw a lot of overseas travel (something I love to do when I have the budget), but said I would always return to the U.S. Since I have tried a few times over the past decade or so to move abroad, it was a little disappointing to be told it was probably time to put that dream on the shelf. Oh well.

Lisa then went on to share that she could tell I have been struggling the past few years (true, the economy can be a real bitch), but that that things are starting to turn around and I am beginning to get a glimpse of the light at the end of the tunnel. It was all very positive and affirming and more than I expected, since I thought I would just get my two questions answered and then get bounced.

Not wanting to ask my colleagues to discuss the details of their questions, just in case they revolved around L-O-V-E, I instead asked them to share their general impressions of the psychic reading.

First up was Sabrina, who said she didn’t mind sharing her experience. The first question Sabrina asked was about her love life. Lisa told her she would be meeting her soul mate within the next year, which would lead to love, marriage and children. Wow, pretty major reveal. Next up was career. Lisa informed Sabrina she will continue to pay her dues in the workforce this year, but that 2016 will be a big year for her career, including more responsibility and more money. She learned she is on the right track, and just needs to keep moving forward. Sabrina emerged from her reading feeling happy and positive about her future.

Next up was Vanessa, who prefers to keep her actual reading to herself, but was happy to share her overall impression. “She really echoed things I was feeling,” said Vanessa. “It felt a lot like therapy. Most of the things she talked about were vague, but in a good positive way, while other things she mentioned were very specific, which freaked me out a little, but again, in a good way. I left feeling all warm and fuzzy, like she actually cares about me.”

Finally it was Ben’s turn. Ben also just stuck to sharing his thoughts on the experience rather than delve into his specific questions. “Lisa was very nice and polite, not at all eerie or spooky like some of the stereotypes about psychics,” said Ben. “I found her laidback, bubbly and fun and I felt comfortable asking my questions, even though initially I was genuinely unprepared for what to ask. Overall I felt a bit like I was talking to the Oracle in “The Matrix,” in that she will only tell you what it is you need to hear.”

Our takeaway? We all had a very positive experience. As for the accuracy of each reading, only time will tell, but for the cost of a take-out lunch in the Old Port, we each got a glimpse into our future, or at least a possible version of our future. Now maybe it’s up to each of us to channel that positivity and go make it a reality.

After our readings were complete, I stepped back into the room to ask Lisa some questions about her for a change.

How long has Psychic Readings been in business?

Jules has owned and operated Psychic Readings for three years.

Who are your typical customers, Portlanders or tourists?

We definitely get a lot more tourists, like many other businesses in the Old Port.

What is the most popular reading that people request?

Do you do any other types of readings other than tarot, palm and psychic readings?

Yes, we also do astrology and numerology.

Do you ever have readings that reveal potentially upsetting information about the customer? If so, do you tell them or keep it to yourself?

It doesn’t happen often, but it does sometimes happen. I feel it is our responsibility to tell them the truth, not fairytales. You have to tell someone the truth, good or bad. Whatever they need to hear, we tell it.

What is the most popular question?

Most people want to know about their love life.

Do you do pet readings?

What is your favorite place to get lunch in the Old Port?

Final question, what is your impression of the Whistler?

(Laughs) The Whistler, he only does it when he’s in a good mood. He’s a good person, he’s just trying to make people happy. Some people think he’s annoying but I don’t.