Is it Possible for Food to be Fresh, Local and Fast? It is at b.good! 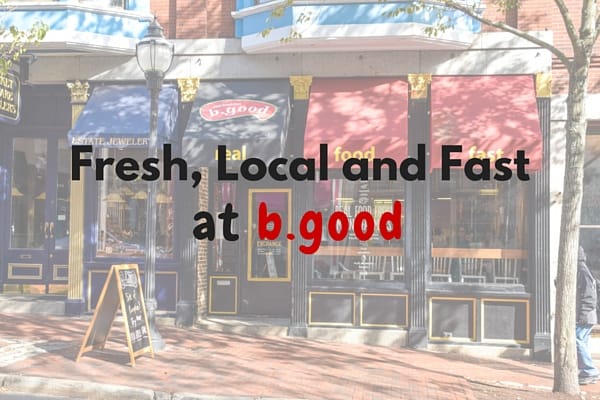 One of the favorite lunchtime destinations for the staff at PortlandOldPort.com is b.good on Exchange Street. The restaurant began serving burgers, salads, kale & grain bowls and milkshakes to Portlanders in 2013 and celebrated their two-year anniversary earlier this month. Their slogan is real.food.fast, but they should also include a few more words in our opinion, including “delicious” and “local” for starters. Sure, your food will take a little longer than at a typical fast food restaurant, but it will be freshly prepared, feature Maine ingredients, taste amazing and be a whole a lot better for you.

Originally founded in Boston in 2003, b.good now has locations in eight states. While they are closing in on 30 restaurants total, b.good’s Old Port location doesn’t feel like a burger and fry chain, and part of the reason for that is their deep commitment to serving food sourced locally and prepared fresh in their kitchen. You won’t find bags of frozen fries and burger patties here because they use potatoes grown at Spiller Farms in Wells and fresh beef from Pineland Farms in New Gloucester. Thirsty? You can quench it with a soda from Maine Root in Portland, or one of several local Maine brews. Last time we stopped in you could choose from Allagash, Foundation, Peak’s Organic or Rising Tide. Or if you are in the mood for something sweet, order a milkshake made with ice cream from Gifford’s in Skowhegan.

And unlike some businesses in Portland’s Old Port that receive a healthy boost from tourism, b.good says their customers are mostly locals, and includes a large percentage of regulars. What inspires that kind of customer loyalty? Before they even served their first burger, b.good owner/operator Bill Zolper said he took several steps to begin connecting with the Portland community.

“We wanted to emphasize the fact that we are a local business and get to be known by the people of Maine first, and not seen as just another chain, which we aren’t, and we want people to know it,” said Bill. “We took so many steps before opening to connect with the community. For example we traveled around constantly with Harvey, our smoothie truck, to give out samples. We took every opportunity we could to connect with people.”

While b.good’s signature menu item is arguably the burger, Bill says the most frequently ordered meal at the Old Port restaurant is actually their kale and grain bowls, especially the Avocado Lime Bowl (if you’re curious, that comes with kale, sautéed veggies, avocado, black beans, corn, grape tomato, queso fresco, lime, cilantro, chipotle puree and red pepper vinaigrette). And because b.good sources locally, that means the menu is altered along with the seasons and available crops.

“We are always changing our menu because we make all of our own food, including our own sauces, salsa, avocado spread, even our lemonade,” said Bill. “We work with Spiller Farms in Wells and owner Bill Spiller is unbelievable, he is our premier farm that we work with. We get everything from them, from corn and potatoes, to blueberries and strawberries throughout the year, so we change our menu based on what’s available.”

That means during the summer months you could enjoy corn on the cob, whereas today their current seasonal veggie special is cauliflower with sharp cheddar and herb breadcrumbs. We don’t normally say this about cauliflower but, yum!

The b.good team procures all of their beef from Pineland Farms, and grind their burgers themselves for freshness. They also create their own veggie burgers, which are vegan and made from brown rice, bulgur, black beans, chick peas, sunflower seeds, flaxseed and a variety of veggies.

Bill and the b.good team’s dedication to supporting local doesn’t stop with food and drink either, it also extends to the music and comedy realm. Every Monday night is open mic night for comedy, Thursday is open mic for music, and Friday and Saturday they book local musicians to perform live.

Giving back is an ongoing theme at b.good, and they really stand behind it. Every Wednesday they hold a community night, where a portion of the proceeds from sales benefit a nonprofit. b.good and their customers are also generous supporters of the Good Shepherd Food Bank.

“When you come in to b.good to order a meal from us your always have three choices, you can eat it, give it to a friend or you can donate it to Good Shepherd Food Bank,” explained Bill. “We take those meal donations and periodically travel to a lower income area in Maine to serve food to those in need. For example, pretty soon we will be going to a local Boys and Girls Club and we will be preparing dinner for them because we received enough for about 250 donations of food items from our b.good family, which is awesome.”

To celebrate their two years in Portland b.good threw an all-you-can-eat neighborhood block party in August, which included a build-your-own-burger station, salads and Gifford’s ice cream – served right from Harvey. Customers could also purchase beer from local brewers. The block party was more than just an excuse to throw a big party on Exchange Street though, it also served as a fundraiser for their b.good Family Foundation.

“The block party was unbelievable and awesome,” said Bill. “We went through over 14 kegs of beer and fed over 1,000 people. It was very important to us that we also raised $4,000 through our foundation, which we are donating to One Posture at a Time and Maine Hatha Yoga, who will use the money to fund yoga classes to help recovering addicts. We have not been here for two years to just feed people, we want to be part of the community for years to come, and we want to help people. The block party was extremely successful and we can’t wait to do it again next year.” 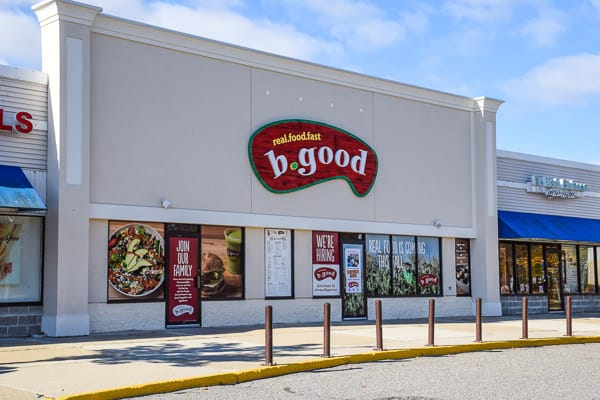 As a result of their popularity in the Old Port, b.good is about to add a second Maine location on Gorham Road in South Portland, which opened today, October 27. Bill says anyone planning to attend the grand opening should expect live music, good times, good food, and of course, Harvey. As he was getting ready to launch his new restaurant, we asked Bill to reflect on his past two years here in the Old Port.

“It has gone unbelievably,” said Bill. “The first year was all about introducing our products to people who didn’t know about us. The second year things have completely flipped around and it has been our customers and b.good family telling people about us for us, and I believe that it all starts with the fact that we are part of the community. We have exceeded our expectations in the Old Port and are excited as what’s to come as far as opening new restaurants and the opportunity to expand.” 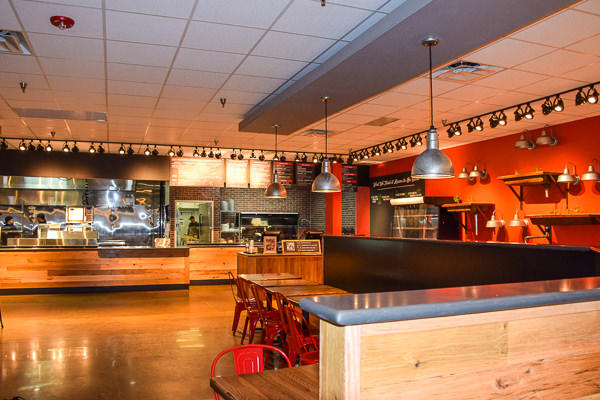 Before we let Bill get back to work we had one final question: If you could only eat one b.good meal for the rest of your life, what would it be? After taking a moment to ponder, he answered, “A Power Bowl with a turkey burger on it. Is also comes with an egg, so it covers you for breakfast, lunch and dinner.” Sounds like a good idea to us!