Love Portland Even More with The Maine Brew Bus

I spent last Friday sipping local beer, mead, kombucha, and even moonshine with The Maine Brew Bus’s Local Pour Tour.  If you haven’t heard of them, The Maine Brew Bus does a series of weekly tours hosted by owner, Zach Poole, and die-hard Portlander, Don Littlefield.  Up to 14 tour-goers are driven around by the unmistakable “Lenny the Bus” to sip local beverages while hearing from the people that make them.    Given how much I love to drink, learn about what I’m drinking, and meet new people while drinking, I figured this would be a pleasant way to start my weekend.  I greatly underestimated, however, just how much this would open my eyes to the new community forming in my hometown. 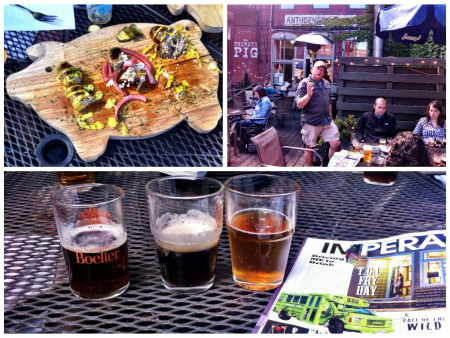 We lucked out weather-wise, with an autumn day that New Englanders’ dreams are made from. This put everyone in a great mood to spend the afternoon touring some of Portland’s up and coming breweries, fermentories, meaderies, and distilleries (all the “eries”, really).   The tour began by meeting at The Thirsty Pig on Exchange St. for introductions and our first tastings.  The group was a mix of locals and out-of-towners.  Don did a great job of easing into introductions, without the dreaded name-games of your middle school past. Everyone shared where they were from and their “alcohol history”, or respective experiences and preferences.  With the greetings brief but illuminating, it was time to dive into our first samples.  Allison, The Thirsty Pig’s owner, brought out Finch’s ‘Fascist Pig’, Allagash Black, and a Shipyard Export, as well as three types of sausages all made in-house. Don gave a brief description of each beer and a little history of their brewery.  What I found particularly nice was that he allowed for the tour-goers to reflect, without judgment, on each beer after tasting them. People seemed to like both the maltier Fascist Pig and Allagash Black, while remaining more divided on the Shipyard Export.  With our first level of familiarity established both with each other and the beer, it was time to hop on Lenny the Bus and visit our second stop of the day. 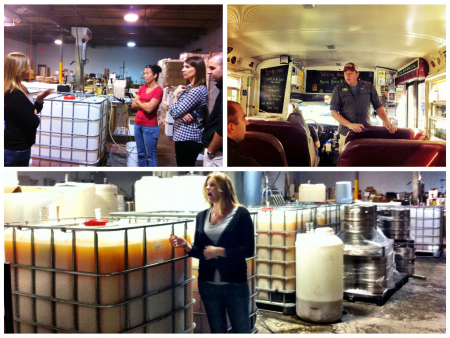 Maine Mead Works was just a short ride away.  Straddling the bottom of Munjoy Hill and the top of the East Bayside community, this business is re-popularizing the honey based drink that you probably remember from reading Beowulf in high school. Their HoneyMaker Mead is fermented on location using wildflower honey and local Maine ingredients.  We began our time there with Maine Mead’s Allison giving us a tour through the production room. I’ve never been one to remember specific details of the fermenting or brewing processes, but I was most impressed with hearing about how much the company had grown since 2007, when Ben Alexander founded it. 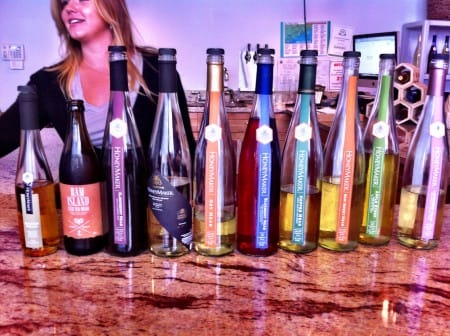 After our peak into the production process, it was time to taste.  There was a sizeable lineup of ten different meads.  Everyone seemed impressed that they weren’t overly sweet, or even honey-like in most cases.  The offerings varied with flavors such as Hopped Mead , Lavender, and even an Apple “Cyser” (still trying to figure out that name) made with Maine McIntosh apples.  I was so surprised how much the flavor profiles varied from one taste to the next. Mead, I learned, can be as variable as beer and wine. 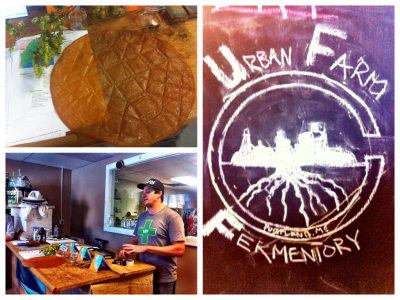 Once again, everyone reflected on their favorite meads, and then it was off to the next.  Our third stop was a mere minute’s ride away to the Urban Farm Fermentory (UFF).  From the moment we got off the bus, it was clear that this was quite the operation, beyond just making and bottling some specialty drink.  UFF ferments kombucha, ciders, and mead.  Beyond that, they are home to the weekly Maker’s Market where local artists can sell their products.  A whole side of their compound is dedicated to space for local independent producers, called Bay One.  Our time there began in the tasting room. We were offered samples of kombucha and hard “cidah” in (adorable) repurposed baby food jars.  These products of fermented tea and apples, respectively, are certainly an acquired taste (one reminded me of steamer broth), but it was fascinating to learn about their unique fermentation process, nonetheless. 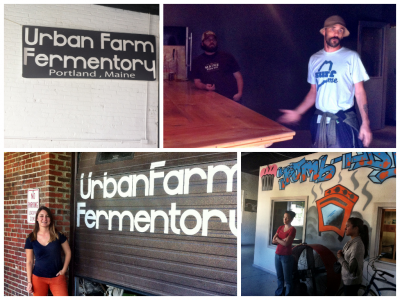 After our tasting we toured the Bay One area where other local artisans like Pure Pops have space to create their products. At this point The UFF founder, Eli Cayer, joined along and gave us a detailed description of the future tasting room and greenhouse being built behind the Bay One complex.  This is the point in the tour that really seemed to strike a note with everyone.  Eli is passionate about creating a community out of UFF where local materials are utilized, classes are taught, and producers are welcomed to share space.  His care for the Portland community as a whole was the standout aspect of this stop on our tour.  As we left I felt a noticeable change with my attitude towards this afternoon.  It became less about just sipping boozey treats, and more about learning from fellow Mainers who are revolutionizing our town.

After the thought-provoking session at Urban Farm Fermentory, Bunker Brewing was the perfect next stop.  We arrived, greeted by a band of characters led by brewer and founder Chresten Sorensen.  Within a minute I knew I’d found my people.  It was clear from the brewers’ demeanors that they love beer: brewing it, talking about it, and (especially) drinking it.  Introductions were short but concise, Chreseten showed us his Bunker tattoo, and then we got right to tasting.  Music began blasting, and we got our first real chance at mingling with both our fellow tour goers and the brewers themselves. I was struck by the quality of beer and Chresten’s Humility stating,  “we’re basically just plumbers—hooking up hoses to other hoses”. 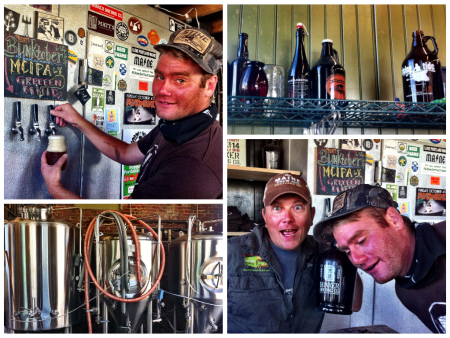 Bunker had a treat for us to try: the first tapping of the Green Mind beer.  Full disclosure: I know next to nothing about beer except I generally don’t like the more hoppy ones.  This wet hopped pale ale brewed with Maine hops was my favorite of the three we sampled (Bunktober and MCIPA being the other two).  Against my suspicions, the flavor held the right amount of bitterness for me without being overpowering.  I knew I’d try things I’d never had before on the Brew Bus, but this really made me reflect on my own tastes. Bottom line: I will be ordering more IPAs in the future.

The sun was shining as we left and I couldn’t help but think to myself that Chresten and Co. love what they’re doing.  One of the other tour-goers reflected on the Bunker brewers saying, “that’s not a job, that’s a lifestyle”. 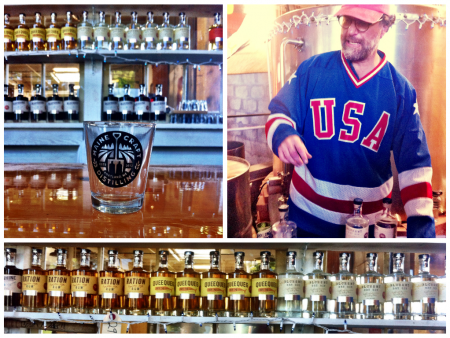 The last stop, or so I thought, was to taste the spirits at Maine Craft Distilling just around the corner on Fox Street.   Luckily for us we arrived just in time for their event releasing their new blueberry moonshine, or Blueshine.  My first impression was that their distillery was absolutely beautiful.  Maybe it was just the buzz from strong hoppy beers, but the sun shining into the large space coupled with the smell of the spirits distilling in large wooden barrels, was a work of art to my eyes and nose.  Instantly, owner Luke Davidson gave us a brief tour of the remarkable facilities. Since their Blueshine release event was happening simultaneously, we got right to tasting. My favorite of the beautifully labeled bottles was the Black Cap Vodka.  I am not a vodka person so this surprised me, but just like my newfound love for IPAs, this trip was all about letting go of past assumptions and preferences. After a quick chat with food blogger Kate, of the Blueberry Files who happened to pop up behind me, I felt a tap on my shoulder from Zach, the owner of the Brew Bus.  I assumed he was summoning me to head back to Lenny for our ride home, but there was indeed a sixth location to round out the tour.

Rising Tide Beer is located immediately next door to Maine Craft Distilling. I’ve recently fallen for their Zepher IPA, previously believing this to be the only IPA I could ever love.  It was Friday around 5:00 O’Clock, and pretty crowded already.  This wasn’t a usual post-work cocktail crowd, however.  There were several families mixed in with laid-back locals, enjoying the space and the beer that was created in it.  I toasted a Zepher with host, Don as we reflected on the day behind us, and the many changes taking place in Portland.

Before this day, I’d only heard of the new community building in East Bayside.  Growing up, I remember when this neighborhood was considered industrial at best, and dangerous at worst.  Within just a few years time, these brewers and producers have taken a chance on this neighborhood and elevated it to an artists’ community, safe for all to share.

That brings me to my final point.  Could I have visited all of these places on my own, seeing as they’re not far from my own home? Of course– But the bottom line is that I hadn’t, so the Brew Bus was a fun incentive to engage with these artists in my own town. Sure I’d had Bunker and Rising Tides’ beers in restaurants before, but the Maine Brew Bus showed me how much more fulfilling it is to witness the creation process and the community growing around it.  Going on the Local Pour Tour is a peak into the future of our town, as more and more people understand the importance of consuming local products. That future, kids, is looking pretty promising. 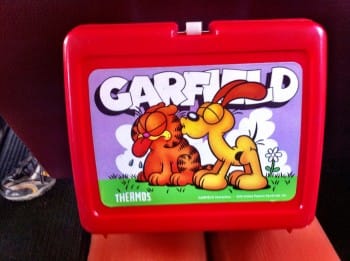 Each person gets an old school lunch box full of water and stickers. Awesome!