Iceage with Wiki at SPACE Gallery 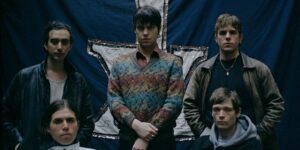 SPACE currently requires masks and vaccination for all event attendees. Medical exemptions can be accommodated. Please refer to our health and safety policy for more information: https://space538.org/visit/

With each new release, Elias Bender Rønnenfelt, Jakob Tvilling Pless, Johan Surrballe Wieth and Dan Kjær Nielsen refigure the contours of a typical Iceage song. This is especially true of Seek Shelter, their fifth LP and first for Mexican Summer. Enrolling Sonic Boom (Pete Kember of Spacemen 3) to produce the record and an additional guitarist in the form of Casper Morilla Fernandez, Seek Shelter sees Iceage’s propulsive momentum pushing them in new, expansive, ecstatic directions. A decade on from their first record, Iceage continue to harness their lives together through music. This journey, in music and life, has never progressed in a linear fashion.

Seek Shelter is the sound of a tight emotional core unwound. Rain dripped through cracks in the ceiling of Namouche, the dilapidated wood-paneled vintage studio in Lisbon where the band set up for 12 days. The band had to arrange their equipment around puddles. Pieces of cloth covered slowly filling buckets so that the sound of raindrops wouldn’t reach the microphones. Kember arranged garden lamps from a nearby party store for mood lighting in the high-ceiling space. It was the longest time Iceage have ever spent making an album. When the rain had stopped, Seek Shelter revealed itself as a collection of songs radiating warmth and a profound desire for salvation in a world that’s spinning further and further out of control.

Iceage started making music together in 2008 as young teens in their hometown of Copenhagen. The band’s 2011 debut, New Brigade, crystallized the raucous energy and unbreakable brotherhood of Danish teenagers weaned on post-punk, hardcore and no wave, and it found ears and kin around the world. 2012’s You’re Nothing was hard, fast and raw, a bold doubling-down on the aggression of youth in the first record as well as the weight of expectation. Plowing Into the Field of Love (2014) and Beyondless (2018) saw a softening of the band’s hardest edges and the arrival of a certain world-weary vaudeville in the Iceage sound. In an extraordinary and unexpected run, the band had gone from the fertile hyperlocal Copenhagen scene to stages all over the world. Iceage’s past two records — all filtered twangy guitar riffs, sparse piano arrangements, and slinky, slow-moving rhythms — ventured into an intoxicated but knowing swirl, surveying the party at the end of the night. They’d seen it all, at least once, and their music rode the crest of that chaos.

What precisely makes an Iceage song is still a mysterious thing, and the band wishes to maintain this protean quality. “If there’s ever a point in our history when something in the songs starts to seem easy but doesn’t really excite us that much, we just discard that shit right away,” he says. “You’ve always got to find a new vantage point to attack the assignment of writing a song. If we had a formula, it would be just a continuous watering down of what we do until we hated ourselves and quit.” With Seek Shelter, they’ve managed to hold onto this core of presence and risk while writing their most ambitious songs. Even Rønnenfelt was surprised with what they were able to create together. “I think when we started we were just lashing out completely blindfolded with no idea as to why we were doing anything.” He’s speaking of the new record and also of their entire existence as a band, a travelogue that has catapulted these four friends far past the horizons of punk. “Some of that we wanted to remain intact. We try to keep the mystery. If there’s no sense of mystery in it for us, then it’s not fun.” Seek Shelter is a record that now exists at a moment of a collective unknown, when every beating heart wonders what will happens next.

On Wiki’s latest project, Half God, the NYC staple connects with Navy Blue, one of the most refreshing young, acclaimed rapper/producers to break out in recent years, for a project that pushes each of their talents to new heights. Wiki’s storytelling as the city’s young OG has never been more vivid and Navy Blue’s production pushes further into every sonic corner he’s explored today, providing a perfect canvas for Wiki’s signature voice. The release marks Wiki’s second full-length release of 2021 after releasing the Nah-produced Telephonebooth earlier this year.

Wiki has become a fixture of New York City Hip Hop since, at 17 years old, he founded the boundary defying group Ratking, whose aggressive style represented a new generation of city kids and artists, hungry for innovation and raw energy. The epicenter of the group as well as Wiki’s artistic expression through music and style was Chinatown, downtown NYC. Ratking’s breakout single was called “Canal” named after the iconic, bustling Chinatown street. Coming of age in the neighborhood, living there for years while creating his solo albums, inevitably laced his music with the culture that permeates the singularly New York, Chinese neighborhood. His song “Chinatown Swing” off his first LP No Mountains in Manhattan paints a picture of walking through the neighborhood and the feelings and sites one encounters. When painting lyrical pictures of New York scenes one gets a sense of Wiki’s skill as a story teller and visionary. He has solidified his role in carrying the torch for NYC’s master MC’s; representing for the freaks, weirdos and underbelly culture.

Alongside revealing the release date of his new album, the NYC rapper also shares the announcement of an upcoming collaboration with the brand Warrior Shanghai, which will feature a customized merch line with sneakers, jerseys, t-shirts, and caps. The Warriors brand brings a classic, everyday life, hard-souled sense of style and functionality to the table in a way that connects with Wiki’s art, and upbringing. Wiki’s collaboration with the brand was intended to pay homage to these characteristics, calling on Wiki to utilize an art project that began as a visual identity in the Ratking days: the Wiki Flag. The green and orange are derived from his mother’s Irish heritage, while set in the shape of the Puerto Rican flag to honor his paternal roots; two ancestries that, like Chinese, are vital to New York City culture and history.