Where to Celebrate St. Patrick’s Day 2022 in Portland, Maine! ☘️ 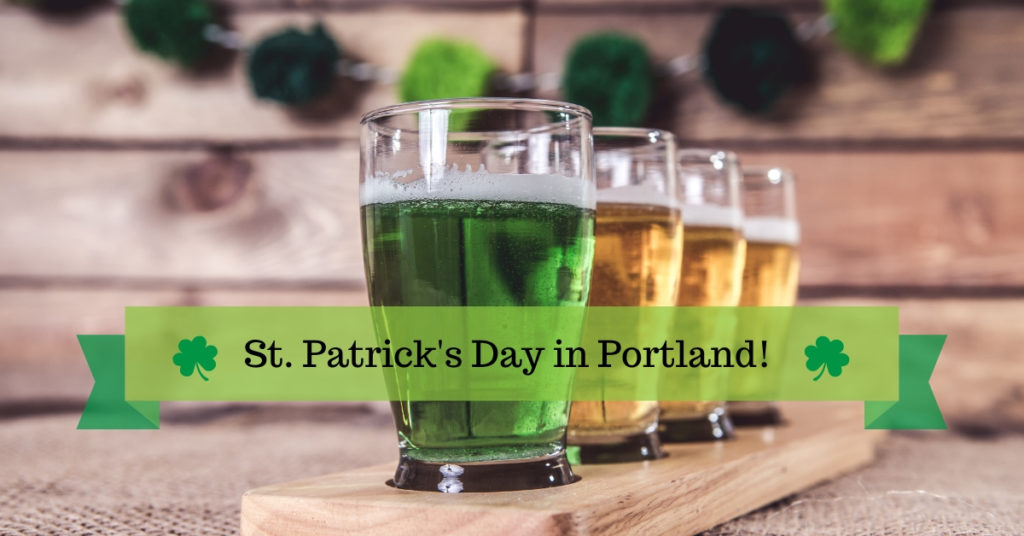 With COVID numbers on the decline, mask mandates ending around the country, and some semblance of normalcy finally returning, this will be the first St. Patrick’s Day in three years that may actually feel like we can get back out there and really celebrate the Irish holiday.

With that in mind, there is no shortage of fun to be had in Portland on and around March 17th this year, including the return of the St. Patrick’s Day parade put on by the Irish American Club of Maine. The parade takes place at noon on Sunday, March 13th, down Congress Street.

So grab your best green outfit, choose between Guinness or green beer (why not both?), and get out there!

Did we miss one? Let us know on Instagram: @portlandolport, or by email: [email protected]. 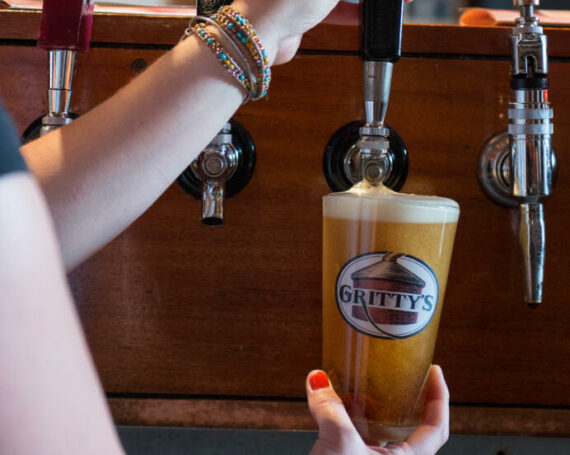 Gritty McDuff’s: They’ll be starting the day at 10AM, serving up a special St. Patrick’s Day menu until 9PM. They’ll have bagpipers livening up the Irish mood at 3:30PM, and their traditional Oatmeal Stout will be ready to be enjoyed by all. Don’t miss this classic Irish pub! Also stop in the night before at 7:00PM for the finalist showdown of their Limericks & Lagers contest, followed by trivia!

Amigos Mexican Restaurant: Opening at noon and keeping the party going until 1AM. They’ll have an early bird special until 5PM with Guinness on draft for $5, and Jameson pours for $7. The upstairs opens at 5PM with Guinness cans for $5 until 8PM. Pours of Dr. McGillicuddy’s go for $5 all day.

Apres: They’ll be releasing 7 Majors on tap and in cans for the day – a black tea and fresh lemon seltzer, along with a non-alcoholic, green, mint-flavored version of the drink available only in their tasting room. 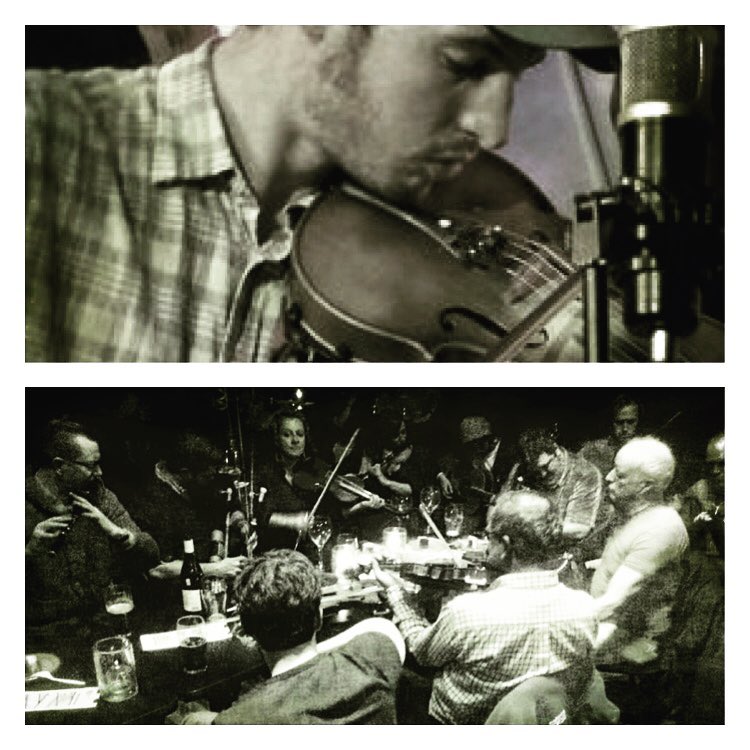 BLUE: Get your Irish going a night early with Irish Night at BLUE. Starting at 7:30PM with music by The Vacationland Trio, followed by an open music session welcome to anyone able to play Irish music. $5 Guinness pints throughout the night.

Bunker Brewing Co:  Opening early at noon and pouring $5 pints of oatmeal stout and their “Green” Machine Pilzner. On A Roll food truck will set up on site for snacks throughout the day.

Fore River Brewing Company: Just a hop and a skip over the Veterans Memorial Bridge, Fore River will be celebrating their sixth birthday St. Paddy’s style. They’ll be opening at noon with live Irish music from locals Bitter Brew with guest Sam Mitchell from 2PM-4PM, food from Cafe Louis from noon until it’s sold out, a raffle, beer specials and more to celebrate the double celebration. 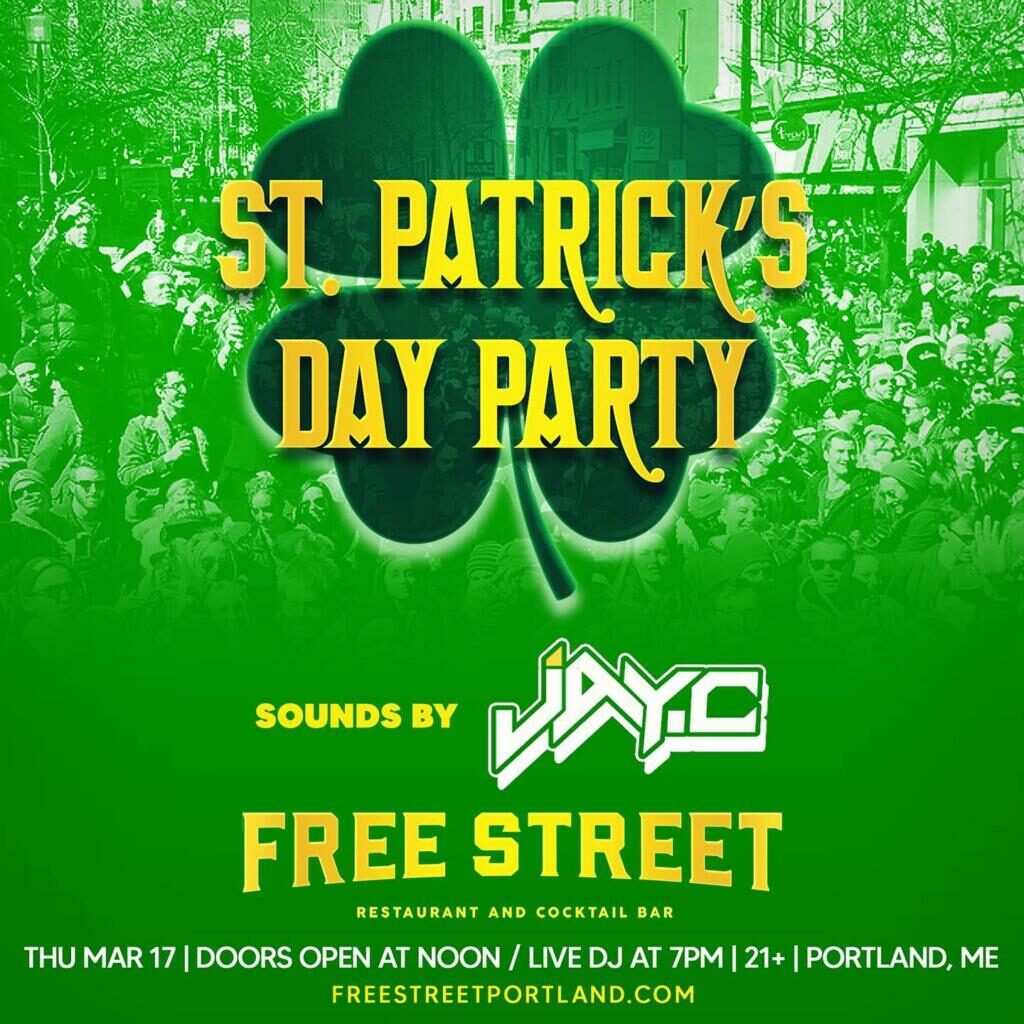 Free Street Portland: Doors open at noon, with DJ JAYC playing upstairs starting at 7PM. Downstairs from 6PM – 1AM, check out the best up and coming bands in Round 1 of Higher Education Music Festival’s Battle of the Bands.

HiFi Donuts: Stop in to try their special St. Paddy’s Day sandwich: corned beef, sauerkraut, mustard and swiss on fresh marble rye bread. You can even pre-order the sandwich from Tuesday through Thursday here. They’ll also have a special St. Paddy’s Day donut, but the only way to know what it is is to follow them on social media. 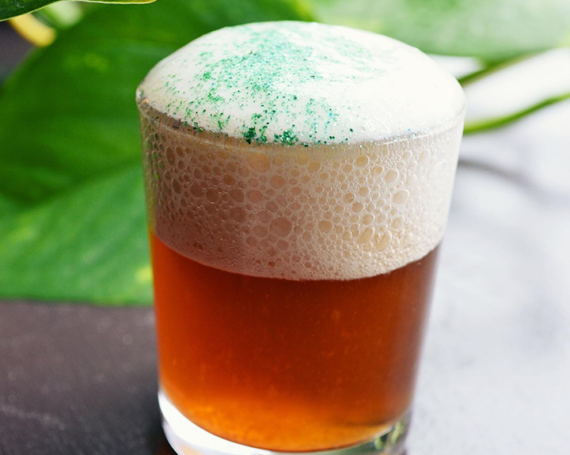 Old Port Nutrition: Their famous Shamrock Shake is here for this week only. With the same nutrition you come to expect from any Old Port Nutrition shake, try a combo of this mint and chocolate shake, and the Irish Flag tea. Share a picture of your beverage on social media for a dollar off your order! 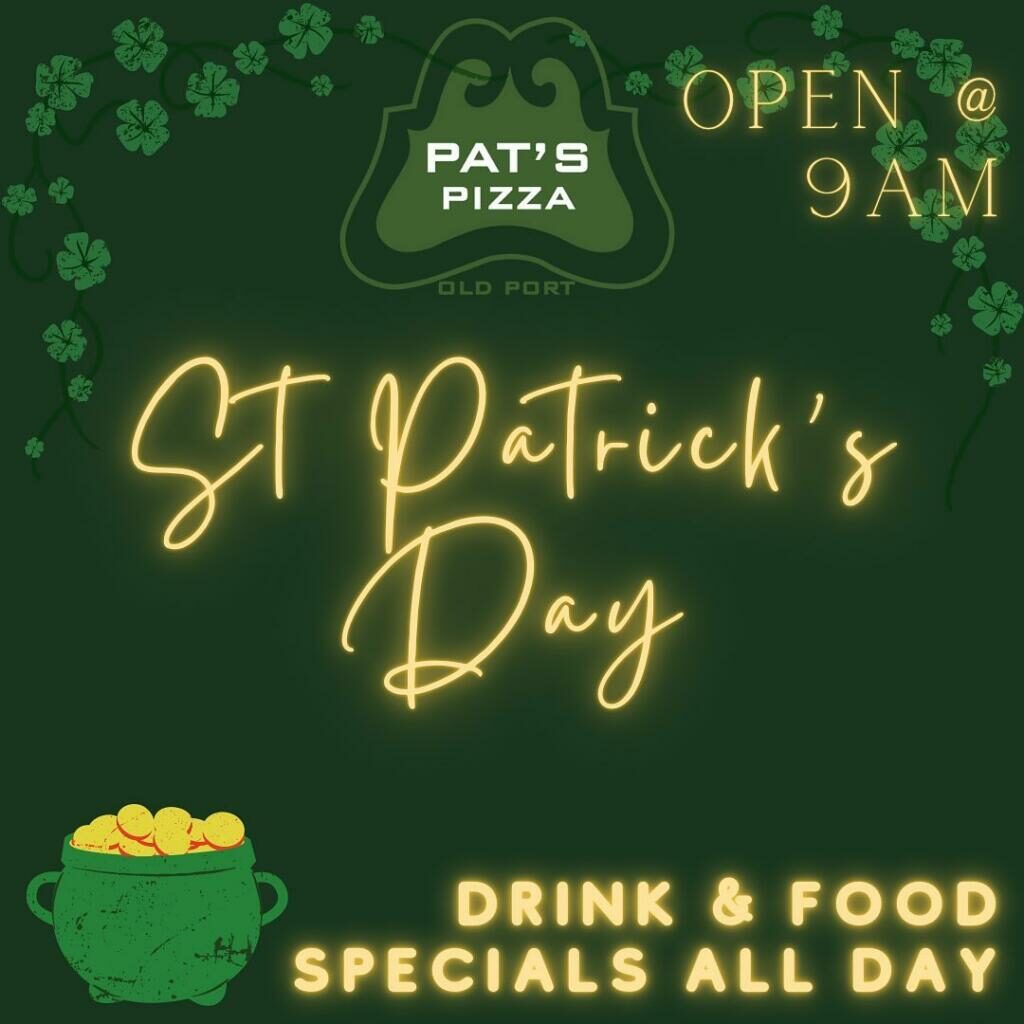 Pat’s Pizza: Opening at 9AM with food & drink specials throughout the day, including a Mimosa & Bloody Mary bar from 9AM-1PM. They’ll also have free pizza from 11AM-2PM, and $5 Guinness, and $7 car bombs all day! 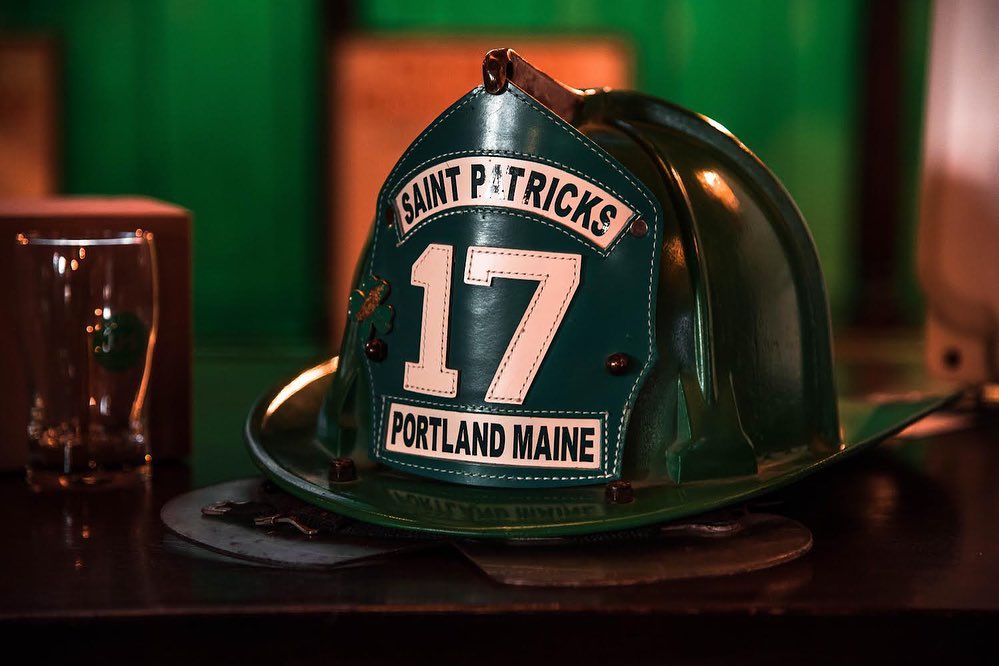 Rira Portland: Opening at 7:00AM – 1:00AM and accepting reservations for breakfast, lunch and dinner with a special Paddy’s Day menu available until 10PM. They’ll have live music throughout the day. Walk-ins are welcome as well. They’ll also be sponsoring the Paddy’s Day Plunge at Willard Beach in South Portland at 7:30 AM to raise funds for the Portland Firefighters Children’s Burns Foundation.

Rivalries: Opening at 9AM and serving up bangers and mash, mini cottage pies, and Reuben sandwiches throughout the day.

Rosie’s Restaurant & Pub: Enjoy a traditional Irish dinner of perfectly cooked corned beef, potato, cabbage, carrots and turnip, plus a dessert of either red velvet or coconut cake, all for $24.99.

Ruski’s Tavern:  Serving up an Irish Benny or special corned beef breakfast in the morning, a traditional boiled dinner later in the day, and plenty of Irish whiskeys and Guinness on tap for whatever time of day you’re looking for it! 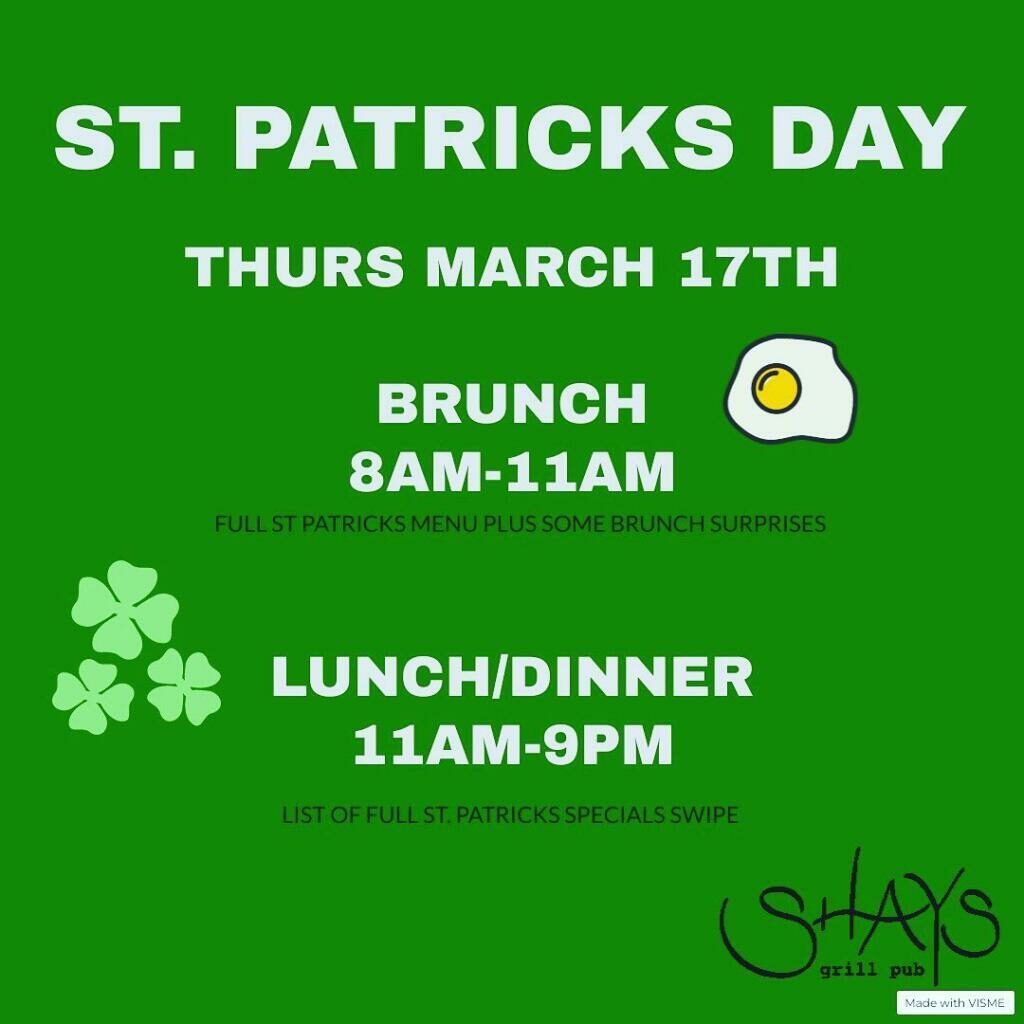 Stroudwater Distillery: Start your day with Kegs & Eggs, starting at 11AM. They’ll have corn hole, holiday drink deals & live Irish music with Jim Brady. Wear green and get a free Jell-o shot! It’s a free event, but be sure to get tickets ahead of time here. 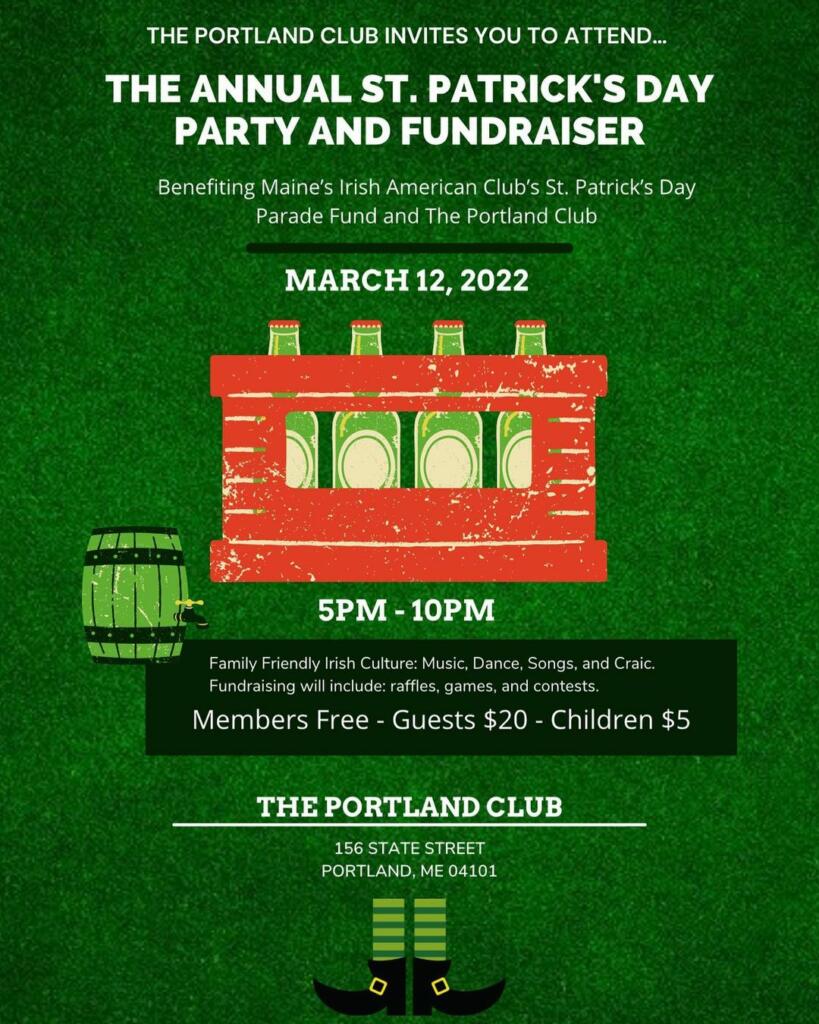 The Portland Club: Start your St. Paddy’s Day celebrations early with a family-friendly party on Saturday, March 12th from 5PM-10PM, with Irish song and dance, raffles, games and contests throughout the night. Tickets are $20, $5 for children.

The Thirsty Pig: Celebrate St. Paddy’s all month long with “The Leprechaun,” a hot dog smothered in garlic mashed potatoes and stout gravy, served up with a secret “pot o’ gold!” They’ll have a Shepherd’s Pie sausage to try on St. Paddy’s.

The Yard: Doors open at noon for a fun-filled day of gift card giveaways, Irish food fare, lots of Guinness to be had, and free live music from 3-6PM. Starting at 7PM will be a ticketed Dueling Pianos show. Get your tickets ahead of time for $20. This will be a sold out show! 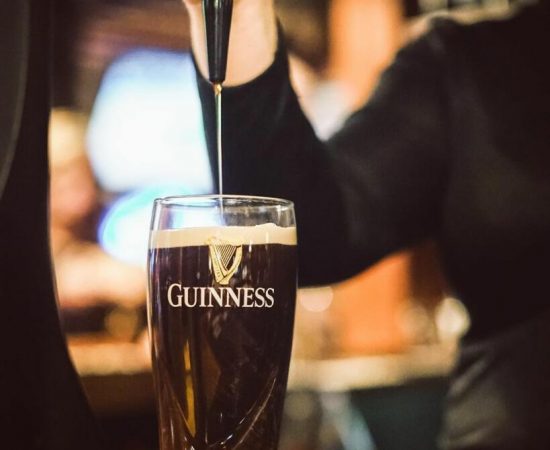 Three Dollar Dewey’s: You can’t drink all day if you don’t start in the morning! Three Dollar Dewey’s will be opening at 6AM for breakfast, with bacon, homefries, scrambled eggs and more. At 11AM they’ll start serving a $14 Corned Beef & Cabbage special, lasting until they sell out, and they’ll have plenty of Guinness and Jameson to go around!

Three of Strong Spirits: They’ll be running their frozen fast food treat, St. Pandan Shake all week with $2 from each sold going to the Intercultural Community Center in Westbrook. Then, for a late St. Paddy’s Day celebration, head over on Saturday the 19th, when they celebrate the return of their Acadian rum with Irish punk band Clapping in Irons. Drinking starts at 2PM, tours and tastings at 4PM, and the band starts at 6PM.

Tomaso’s Canteen: If you’re a fan of Tomaso’s, then you’re aware of their Beer & A Shot drink specials. They’ll be pairing everyone’s favorite Irish beer – Guinness with a shot to be announced for the day.

We’ll be adding to this list as we get closer to the big day and more events and food and drink specials are announced, so be sure to check back regularly so you can come up with the best plan for how you want to spend your St. Paddy’s Day.

Did we miss one? Let us know on Instagram: @portlandolport, or by email: [email protected].